The End of the Avenue 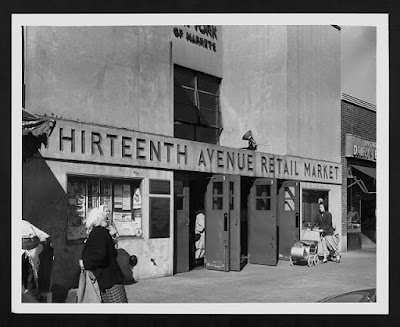 
I'm sorry I never got to visit the 13th Avenue Retail Market when it was still an active scene.  Fiorello LaGuardia created a number of these indoor retail markets, in the late 30s and 40s, in an effort to eliminate pushcart traders from the streets of the city. This one, opened in 1939, was one of the first.

Though the market signs remain etched into the walls outside, these days the inside space is filled by a giant Gourmet Glatt supermarket. I looked along the aisles, but was rather overwhelmed by its size. It was too warm a day to buy groceries I'd have to lug around outside for any amount of time, so I left empty-handed.  There's a kind of shabby, in-between quality here at the end of 13th, as the neighborhood hovers between Borough Park and Kensington, and I found the same, confused border identity farther south at 60th, just beyond the railway tracks where Dyker Heights meets Borough Park.  I'm drawn to these vague, shifting territories, but sometimes they'll sap your spirit, and they're often easy prey to watchful developers. 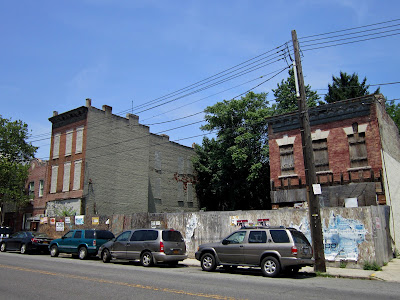 Back in April, I had almost met my goal of walking every block in Sunset Park - a beautiful experience to that point - with just a handful of streets left to go, when a stretch of Fort Hamilton Parkway near 36th (Borough Park meets Sunset Park meets Kensington), caught on a gray, blustery morning, felt utterly lost and cheerless. Three months on, I'm yet to complete the walk.  I will, I will.

At the end of 13th, at 36th, I turned around and headed back to 40th.  At Morrito's Cafe, I polished off a plate of pupusas (revueltos) .  Dense and earthy, rich with pork and beans and cheese, and just oily enough for complete dining bliss.  The best of their kind. 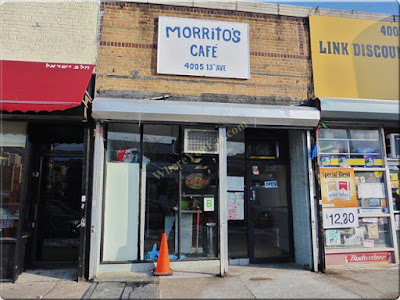 Posted by onemorefoldedsunset at Monday, July 06, 2015