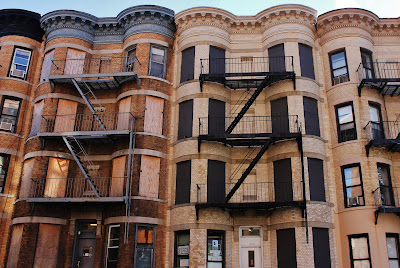 
Here's what looks like some very good news, via DNAinfo.  Foreclosed 342 14th Street, one of a pair of long-boarded-up eight-family buildings between Sixth & Seventh, is set to become affordable housing for moderate income tenants. Two former tenants, who were moved out in 2012, will be able to return, at the same rent they last paid, when renovations are complete.  The project is being administered for DHPD by Neighborhood Restore, and will be turned eventually be turned over to non-profit developer Bridge Street Development Corporation.  Renovations are set to begin by the end of the year.  Of course, it'll be interesting to see what "moderate" actually means, and it's shameful that all the development around here has produced next to nothing in terms of affordable units of housing.  Must we learn to live with such limited expectations?  Eight units are a pittance, but will at least bring real help for eight households.

It looks like a different fate for 340, where it appears that at least one tenant has stayed put, despite appalling conditions at the building.  340 was sold for $2,125,000 three years ago to Lido Realty LLC, and has been undergoing renovations.  One can expect to see market rate housing here- either high-end rentals or condos.  As DNA notes, soon there'll be condos right across the street.

The affordable housing plan comes as Park Slope real estate prices continue to soar. The neighborhood just set a local record with the sale of a $12.4 million mansion at 17 Prospect Park West. The 14th Street affordable housing development is across the street from a (former) day care for low-income children that will soon be torn down and replaced with market-rate condos. 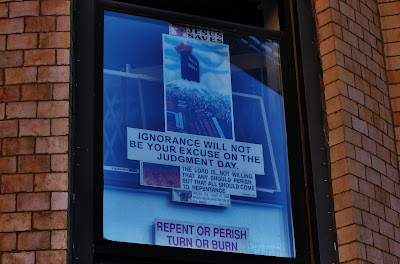 Posted by onemorefoldedsunset at Monday, July 20, 2015