The store space at 673 Fifth has been empty for a good while now.  The last business at this address was Sabor A Mexico.  The place is still being listed for rent by CPEX at $6,000 per month.   The building itself was sold at the end of last year, and plans have been approved for a horizontal expansion of the second and third floors.  Sharp-eyed reader Scott Steinhardt alerted me to the fact that work at the building had revealed an older sign, and sent in a couple of pics.  Here's one of them.  LIQUORS revealed. 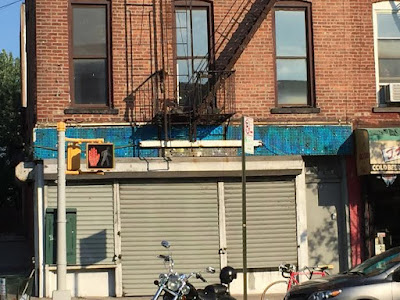 The LIQUORS part is easy enough to make out, but the word on the left is harder to read. I went over there myself to take a look, but couldn't make it out.  I'll check back to try again.  Even though I've lived around here a while, I can't remember the sequence of businesses that have occupied this address in recent decades.  I know there was a liquor store at the corner for a long time, but can't find a reference to it online after the 30s.  Here's a '34 New Year's ad from the Brooklyn Eagle, with Lanter's at 673. There are some fine brand names featured in the ad, including a crowd of wheezing, ruddy-faced Olds:  Old Hardie, Old Mallory, Old Oscar Pepper, Old Crony, Old Dutch & Old Mr Boston. 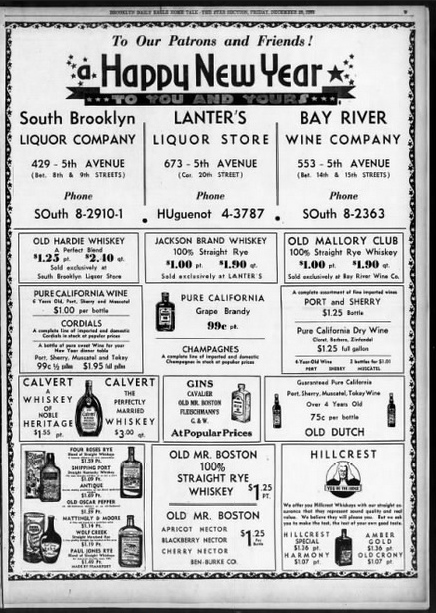 What became of the three liquor stores featured in the ad?  Bay River is still around, one block south from its earlier address, with its name just about intact, and plans to turn it into Park Slope Wines & Liquors have been seemingly jettisoned.  Prime Time Liquors operates in place of (De Silva) South Brooklyn Liquor Company, which at some point in time hopped one store over to 427.   Lanter's, and any successors, disappeared completely.  I wonder what's coming in at 673 next.

Posted by onemorefoldedsunset at Wednesday, July 29, 2015