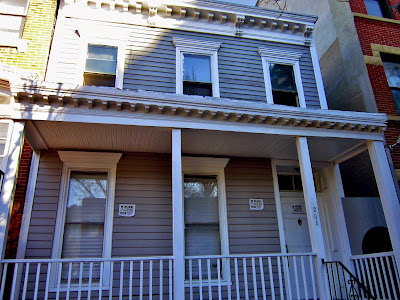 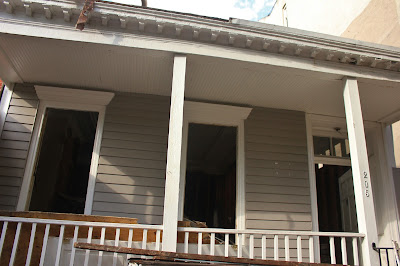 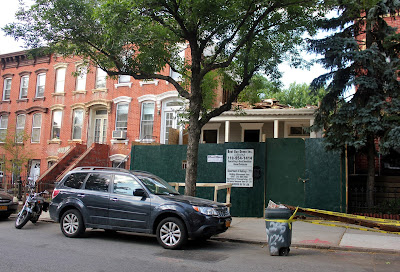 A demo permit was approved for 205 12th Street in mid-May, and destruction of the house began this week, courtesy of Blanche Pessolano of Best Buy Demo.  We remember all too well the Pessolano/Marie Grasso Best Buy/MMG team, a rather notorious crew. Here's the Daily News on Grasso back in 2009:

Marie Grasso may be the city's ultimate home-wrecker. The Staten Island demolition company owner is No. 1 on the list of building code scofflaws. Grasso has run up more than $1 million in fines by routinely violating building code safety rules, permitting conditions that injured workers and undermined the stability of adjacent properties. Yet the city continues to award her permits to knock down more buildings.

205, close by the path of the old Gowanus Road, dates dated back at least to the 1870s, and there's a good chance it's it was older than that.   I only discovered today that it was listed as historically significant in the report submitted for designation of a Gowanus historic district.  Sadly, the New York State Preservation Office shelved the designation last year, after community residents voiced their objections, apparently misled by an anti-designation group into thinking that historic status was similar to landmarking.  In fact, historic designation does not affect homeowners' property rights in any way, and actually offers significant tax credits for property restoration.  Could 205 have been saved if it had been placed on the State and National Register of Historic Places?  Perhaps not, but it might have persuaded the owner to think twice about tearing it down, or helped it find a buyer keen to preserve a piece of history.  Instead it vanishes, with nary a voice of protest, just like so many other of the old wooden vernacular buildings in the borough.  In its place, more condos.

I tried to do a little amateurish digging around online to find out more about the house, and came across a single, quiet line, buried in records from a century back, apparently recording the approval of a permit.  An epitaph, of sorts.

Disappearing on 12th Street
Declining Price in the Brooklyn Boom?

Gowanus Historic District Shelved, Not Nixed (Brownstoner)
A Preservationist Explains Why Gowanus Could Be Listed as a Historic Place (Brownstoner)
State will not move forward with historic district designation of Gowanus due to overwhelming opposition (Daily News)

Posted by onemorefoldedsunset at Thursday, July 23, 2015