Back at The Port-of-Call 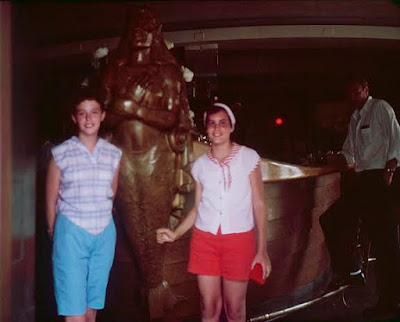 If it hadn't been for reader Virginia Maksymowicz, I'd never have known about The Port-of-Call, the boat-shaped bar at the Seafarers International Union headquarters at 575 Fourth Avenue. She wrote in a few weeks ago, in response to a post in which I'd mentioned the building (now a school), to tell me about her father, former Chief Petty Officer Henry "Hank" Maksymowicz, who'd tended bar there, and about her memories of visiting the place as a child.  Shortly after she wrote in, inspired by her words to find out more about the bar, I came across a Stanley Kubrick documentary from the 50s, The Seafarers, in which the Port-of-Call can be seen in all its glory.
And now there's more.  Just last week Maksymowicz sent in a photograph, taken by her father in the Port-of-Call in 1964, showing her (at left) with a childhood friend, Joyce.  They stand on either side of the mermaid, the bar's voluptuous, carved wooden figurehead.
Beautiful.  Many thanks!


Posted by onemorefoldedsunset at Tuesday, July 07, 2015