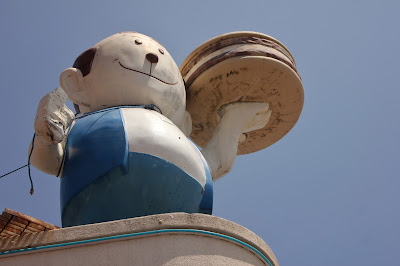 Perfect weather for a ride to Coney Island, with an early enough start to hold down a table at Ruby's, and late morning beer-in-hand, survey the action.  With every visit, there are signs of Coney's transformation, what with newer, generic looking stores, newer, pricier rides, and the bawdier, old-style carney charms replaced, bit by bit, with a slick, branded air of corporate sleaze.  The Times Square Characters have made their appearance on the boardwalk, though early in the day, when crowds were thin, Batman, SpongeBob and their ilk, seemed to be having a rough time of it.  The Wahlburgers cafe looks set to open soon, and signs are all over the place for foodie empire Smorgasburg's newest outpost. 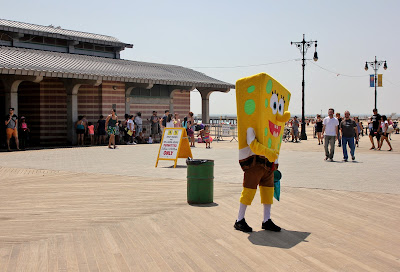 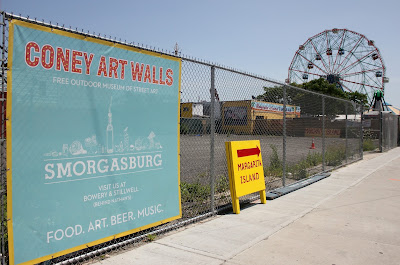 And yet.  Even with all this.  There's the air, the light, the music on the jukebox,  all evoking the sweet tender, sentiments of summer.  Here a Donna Summer, there a Louis Prima. The guys at the tables outside the bar, sun-baked a deep, leathery, mahogany, are still guardians of the seasons.  The seventy-something man in an Iron Maiden t-shirt, carefully clinging to his ice-cream cone, the cute pubescent kid, a kid who knows just how cute he is, with coils of python draped around his shoulders, the big, big, woman in a blonde Afro and a powder-blue bikini, strutting her ample stuff with fearless abandon?  All beautiful.  Hell, even Batman cuts a better figure here than on 42nd Street, and SpongeBob, who pissed me off for much of the time I was there, was redeemed for just a moment when a crowd of camp kids descended upon him with howls of delight.
If there's a tipping point, and surely it will come, it hasn't quite got there yet. 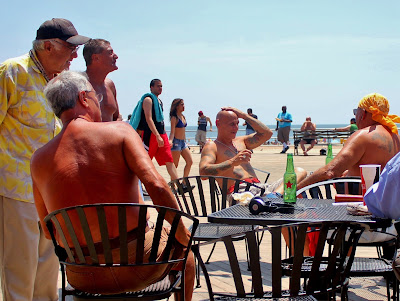 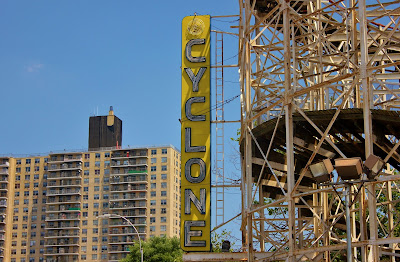 Posted by onemorefoldedsunset at Saturday, July 11, 2015