No Medical Marijuana on Third

Mindful Medical, a Colorado-based company, is planning to turn 800 3rd Avenue into one of their four allotted dispensaries if their license is approved by the State of New York. Their other planned locations are in Binghamton, Buffalo, and Yonkers, with a growing facility in Georgetown, NY.

Well, now it looks like there'll be no medical marijuana dispensary on Third any time soon, nor anywhere else in Brooklyn for that matter.  Today the NY Department of Health announced the names of the five organizations chosen to grow and dispense marijuana in the state, and Mindful Medical was not among them.  Those dispensaries approved to operate in the city will be in Manhattan, Queens, and the Bronx,

The organizations will be registered with the state, and each will be allowed to open up to four so-called dispensaries statewide. They are required to be doing business within six months, meaning medical marijuana could be on sale in New York before the end of the year. (New York Times) 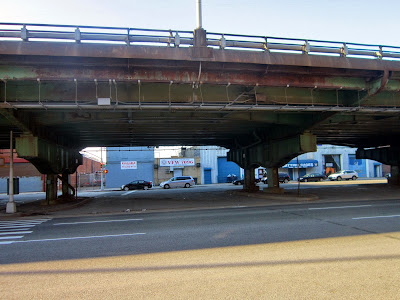 Posted by onemorefoldedsunset at Friday, July 31, 2015

No more Time Crisis and batting cages though :(

Yes, indeed. I knew I had a fairly recent picture of the location somewhere (early '14), and have just added it. Can you imagine how it's going to be down there in just a few years? And it's amazing to think that the Gowanus Road ran right along there, and that the Dutch settlers were building their farmhouses here in the 1600s.