A Stop Work Order went into effect at 635 Fourth (19th) yesterday. Construction is ongoing for a 91 unit, 12-story, mixed-use building.  Included in the plans are that mythical commodity, affordable units (a whopping 6-12 of them).  At least, they were in the original plans - I assume that's stillthe case. 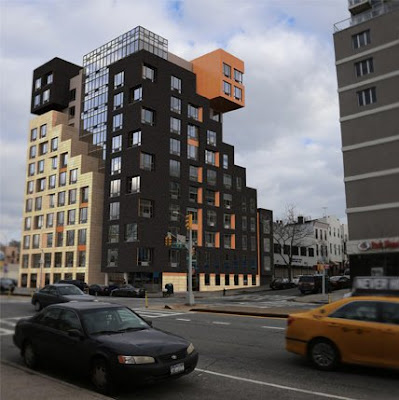 The SWO is for safety violations - failure to provide guard rails, and failure to provide life lines to workers working over fifteen feet high.  It looked like some kind of remedial work was going on at the north-east, 19th Street side of the site yesterday, where poor beleaguered 179 19th sits on the edge of a giant pit.  As we well know, it's no fun at all being the last house in line next to a construction site, and this one's massive. 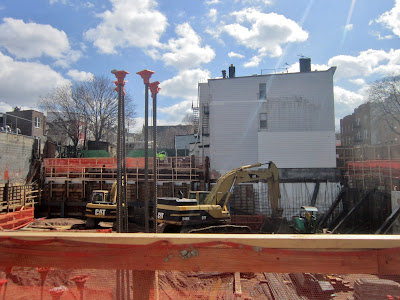 Earlier (resolved or dismissed) violations at 635 include work not conforming to plans, failure to provide adequate inspection programs, DOB filed forms presented at construction site without required signatures, lack of a site safety manager on site, failure to comply with the NYC fire code, excavation started without informing DOB, and failure to comply with a partial SWO. No fines were issued for the violations

(Local residents will remember that this site was once occupied by the International Seafarers Union, who sold their headquarters for ten million dollars back in 2013. From the 1940's to the early '90's the Union was based at 675 Fourth, where a public school building was refitted for the purpose.  675 is now a school (the Al Noor School) again. Last year, prompted & aided by a wonderful reader, I got involved in uncovering the history of the earlier Seafarers Union building. I found a Stanley Kubrick documentary, shot for the Union in 1953, which centers almost entirely on 675 - a delight! - but perhaps best of all, reader Virginia Maksymowicz, whose father was a barman at the building's Port O' Call bar, discovered that the bar's mermaid figurehead survived the moves, is still in Union hands, & graces another boat-shaped bar in Maryland. You can read about it (& follow the links back) right here. )


Posted by onemorefoldedsunset at Tuesday, March 22, 2016