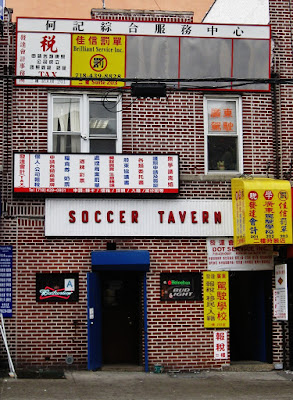 Most everyone there on Wednesday was Irish, and I might have been one of the youngest customers. We were flanked at the bar by two friendly guys, knocking it back steadily, and telling stories. Of going to see Charlie Mingus at Slugs jazz club on East Third in '72, and having the honor of getting your lost wallet handed back to you by Mingus himself. Of the very next week in Slugs, when jazz musician Lee Morgan was shot in the head by his common-law wife. Of the club folding soon after. Of County Donegal, the changing neighborhood, & Farrell's owner, Daniel Mills, who jumped to his death off the Verrazano back in 2008, after learning he was terminally ill. Mills had worked on the bridge's construction back in the 60's.
Though the bar has a steady Chinese presence these days, (and apparently is still frequented by a smattering of elderly Scandinavians) it wasn't apparent on this night, with only a couple of Chinese customers, and it felt like the very heart of an older Sunset Park. It's a dim, beer-soaked place, with dark & elaborate cabinetry, and a fine bar. A couple of maps - the world and the States - are up on the walls, and an Irish stock calendar hangs behind the bar. There's a public phone next to the jukebox, and the list of songs hangs from the wall in a well-thumbed book. Its one of the friendliest bars I've ever walked into. (2011)

Posted by onemorefoldedsunset at Thursday, March 17, 2016