Crunch Gets the Nod from CB6, "Existing Businesses" Long Gone

At the end of last week Park Slope Patch reported on the CB6 green light for a Crunch gym at Fifth Avenue & 15th Street.  Readers might remember that we wrote about the sale of the 555 Fifth building late last year, and noted the leasing of the building to Crunch.  According to the Patch reporter, an attorney for Crunch, Michael Nacmias, told the community board that "the fitness center would take up part of the building’s first floor, as well as its entire basement and second floor, but wouldn't displace most of the existing businesses in the property," and the reporter noted that "those businesses, including a grocery store, were closed Friday" (March 25th).

In fact, businesses at 555 Fifth lost their leases & were all gone by January of this year.  These included the corner deli, a nail salon, Aikido & Bikram studios & a large discount store. Sky Discount was the last to leave.  Sky managed to find a spot across the street, paying a higher rent for a smaller space, replacing another discount store that could not afford a rent hike.  The Aikido center moved to Sackett Street.  I don't know if the other businesses managed to find new premises.  If Mr. Nacmias really informed CB6 that the most of the existing businesses would remain, I'm surprised that no-one on the committee was aware that this information was quite incorrect.   I would have expected a firmer grasp of the retail situation on Fifth.  It seems quite likely that the retail spaces here will in fact be rented out to new, higher end businesses at higher end prices.

It's not surprising that the corner grocery store was closed last Friday.  The 555 deli space was cleared out in December, and its sign torn down by the end of that month.  An earlier business sign was revealed underneath. 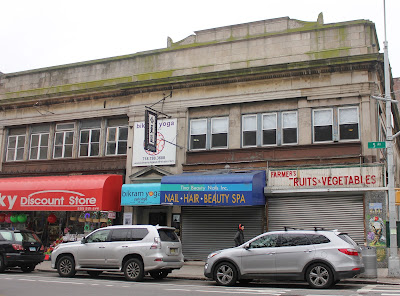 Posted by onemorefoldedsunset at Monday, March 28, 2016