Last November I noticed what looked like demolition work going on at 615 Fourth Avenue, at the corner of 18th.  Certainly there were no permits at the time for work at the warehouse building.  615 and next-door frame row house 613 were sold last September to the felicitous sounding South Slope Bliss LLC for $7,300,000 (615) and $2,500,000 (613).  In January demolition was approved for both structures.  The DOB site recently revealed that 611, another S.S. Bliss acquisition, is also set to be demolished.  The deed of sale for 611 has not been recorded on ACRIS yet.  The demolition of the three properties will make a sizable building site, and leave 609, home to the very enjoyable bar/cafe Supercollider, as the last of the three frame buildings on the block.

No plans have been filed for new buildings as yet. 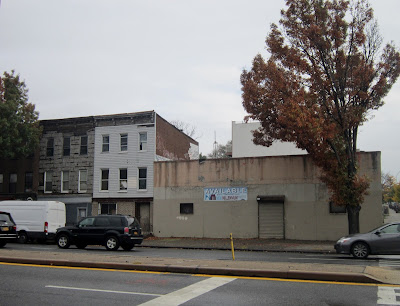 Posted by onemorefoldedsunset at Tuesday, March 08, 2016