1.  In all ways, the dominant and most characteristic inhabitant of this betwixt-and-between area was the rhubarb.  Leeds had a ram on its coat of arms indicating its historic reliance on wool for its clothing industries.  It might just as well have put a stick of rhubarb. Field after field marched round the outer limits of the town on the south like a rank, deep, defensive fence; and that had a certain rightness. Like urchins, it seemed to thrive on dirt and smoke.  This rhubarb was not that thin, small, pale pink forced stuff sold in supermarkets nowadays.  It had as much relation to that neat pie-filler as a great miner to an effete courtier.   (Richard Hoggart)

2.  I always thought that my life couldn't be written about.  I remember the day I began to change.  It's in the poem I wrote called 'Rhubarbarians'.  I used to go walking with my father near East Ardsley, where the rhubarb fields were; tusky, as we called it.  He told me that 98% of British rhubarb came from Leeds.  And my Dad said, 'Oh I was in a play once, I was;  I held a spear in Julius Caesar at school.'  He said they taught him, as they do in the theatre, to make indescribable crowd noises by saying 'rhubarb, rhubarb, rhubarb'.  So I always had that sense that saying 'rhubarb' was what my life was about, whereas the central literary life was elsewhere.   (Tony Harrison)

3.  I keep an unruly rhubarb patch in the back yard.  Baked in crumbles, or stewed with a dollop of cream or custard. 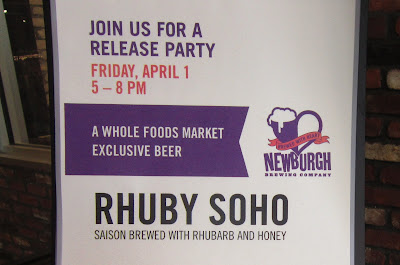 Posted by onemorefoldedsunset at Tuesday, March 29, 2016