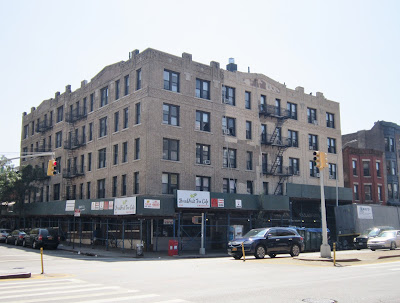 In 2012, the apartment buildings at the southeast corner of 4th Avenue & 10th Street made no. 11 on then-Public Advocate Bill de Blasio's Worst Landlord list, with a whopping 224 violations, 34 more than it had when listed the previous year.  The owners at that time were Prime Properties of New York.  Sadly it didn't look like this public shaming had any impact on the state of the buildings or the quality of life for the tenants who lived there.  A cursory look at building permits shows little remedial work recorded during the 1990s, & none at all between 1998 and 2015, apart from the renovation of retail space in 2012.  It certainly didn't look any better from the exterior.  This summer, though, scaffolding went up at the buildings (453 - 459 Fourth, and 292 - 304 10th), which made me guess the building had been been sold, though I couldn't recall hearing anything about a change of ownership.  My hunch was right. The buildings were sold last June, for just under 18 million dollars, though the sale was not recorded until October.  I had a hard time finding much evidence of the building being listed for sale, and only found this Loopnet listing from around 2005, two years before Prime Properties took over the place ($7,950,000) from Leon Goldstein.

The newest owners are 300-304 10th Street FT LLC - address c/o Madison Realty Capital, a prime player in city development.  In Brooklyn alone Madison is behind plenty of big-ticket moves. Last week it was announced that the company is providing the financing for the LIC Hospital acquisition, and earlier in the month Madison purchased Sunset Park's Brooklyn Whale Building for eighty-two million dollars.

Permits have been filed this year for renovation of public hallways, individual apartments, boiler replacement & facade work.  While work is certainly ongoing, there are still open violations for gas work without a permit (2014), plumbing work without permit (8/15), failure to maintain exterior wall with severe masonry deterioration (2009) (2010), bathroom ceiling collapse (2010), failure to provide gas for cooking (2014), electric work without permits & apartments being gutted without permits (3/15, 5/15), accumulation of construction debris (8/15).  There is a mobile boiler on site, and reference to a gas leak in a (disapproved) job-on-file at 302 (8/15). 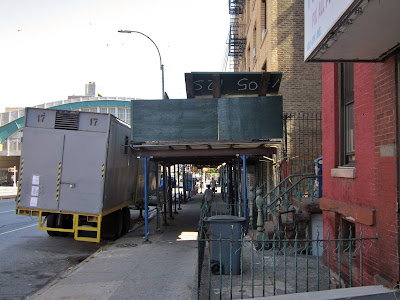 In the meantime, recent listings for apartment rentals in the buildings certainly don't look that low any more.  Rentals have appeared online for 2-4 bedroom apartments available from $2,750 to $4,700 per month.  These are net-rentals with 1 1/2 months free on an 18 month lease, which would make the actual rent (if renewed) between three and five thousand dollars per month.

I don't know any tenants in these buildings, though I've heard plenty of horror stories from long-term, rent-stabilized tenants living in other multi-families nearby, whose buildings have been recently acquired by investors.  Forced to live in construction chaos, misinformed of tenant-rights, offered paltry sums to vacate to vacate their apartments.  It's common stuff.  Upside for the few = disaster for the many.  I'd be interested to know how many of the family-size apartments here are now free-market (probably singles shares), and how many remain rent-stabilized.

There's only one note of levity in this all-too-familiar story of multifamily make-over.  In the rental listings, old-time Smith's Tavern, last blue-collar bar on Fifth, has somehow made it onto the list of nearby attractions for the today's would-be tenants.  Really?  Mention those rental prices to the patrons of Smith's and see their reaction. 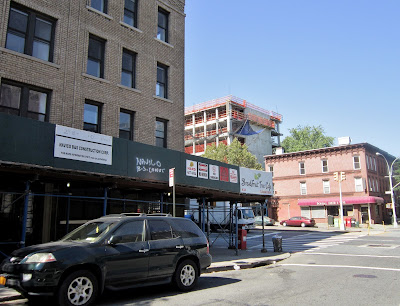 Posted by onemorefoldedsunset at Tuesday, September 08, 2015