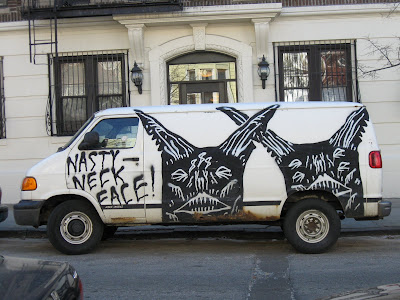 Not on a rooftop, but at least in the neighborhood - Neck Face, 2010

Yesterday morning I was waiting for the F train on the Smith & 9th Street platform.  Even in an era when almost all travelers are clutching their smart-phones like babies with blankies, the platform views induce at least some riders to exchange their screens for another kind of hypnosis - some of the best views the city has to offer. I'm so obsessed with the views from the viaduct that, starved of its use for two years, in 2013 I took a day off work to be present at its grand re-opening.
You can never tire of being up there.  Yes, there's the Emerald City there in the distance, The View that developers crave, but I'm almost always focusing on things closer at hand, and marking the changes in almost thirty years of gazing.  Especially in recent years. The Kentile sign gone.  The Fourth apartment buildings, sprouting excrescences, spreading along the avenue.  The Whole Foods, manna for the affluent, & opposite, parole center, bane of same. The Bat Cave, with End Stop & Frisk its last (or so it seems) public statement.  Joan of Arc, no longer wielding her sword over basin waters.  Yesterday, for some reason,  I thought of the hairy-armed Neck Face graffiti that used to adorn the warehouse rooftops.  Wonderful work.
Later in the day, I read an announcement from The Park Slope Civic Council.  Forth on Fourth, its community group working to promote "well-being, safety & vitality" on Fourth Avenue, is partnering with other local organizations to "Yarn-Bomb" the avenue with hand-knitted textiles later this fall. The textiles will stay in place for two weeks.  The term yarn bombing is conveniently defined in the FOF public notice.

Urban knitting or graffiti knitting, a type of graffiti or street art that employs colorful displays of knitting or crocheted yarn or fiber rather than paint or chalk.  Yarn bombing was initially almost exclusively about reclaiming or personalizing sterile or cold public places.  Yarn installations are considered non-permanent, and unlike other forms of graffiti, can be easily removed if necessary.

What a perfectly Park Slopean form of graffiti.  Polite, wholesome, and knitted, with none of the expressive in-your-face rush of real graffiti art.  Etsy graffiti-lite. The aim is to bring "color, life and art to our neighborhood," and why not, indeed?  I'm all for that. But frankly, I 'd rather see some real graffiti on Fourth, graffiti that directs its aim at the luxury housing that mars our avenue, housing (with not even one affordable unit) that even Brad Lander admits to have been "largely a failure."  If there's coldness and sterility on Fourth, it's been brought about by high-rise development, and the steady decline of affordable housing.  The steady decline of a mixed-income neighborhood. I laud the FOF's aim to make traffic on Fourth safer, though I do think you have to maintain functioning traffic arteries like Fourth in our congested borough - you can't do without them.  And of course there's nothing wrong with making the avenue more beautiful - before the subway came in on Fourth the avenue was certainly a much grander affair.  But that's the frilly stuff, really.  The real deal's the housing.  One of the objectives of Forth on Fourth is to

but I haven't noticed much committee action on this issue in recent years.  I'd like to see housing at the top of the list.


Posted by onemorefoldedsunset at Thursday, September 17, 2015