The Caring Developer, or Is Seeing Really Believing? 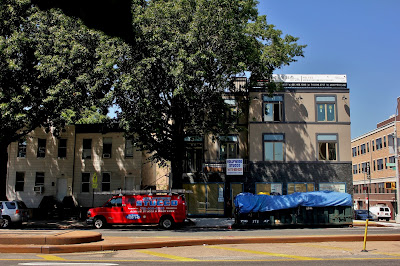 New rental apartments are available at 672-4 Fourth Avenue, and 168 20th Street. The three buildings, comprising two mixed-used buildings (two residential apartments plus retail apiece) and a six-family, have now become The Gardens on 4th.  Here's part of the realtor's description:

"Seeing is believing at the Gardens on 4th.  The brand-new, one-, two- and three-bedroom residences below the roof decks are just as impressive. High ceilings, windows everywhere and enough natural light to nearly warrant wearing sunscreen in your living room. Central A/C, granite and stainless steel in the kitchens, tasteful bathroom finishes and USB-capable electric outlets that scream "finally a developer who cares!"

According to DOB records, Brolub Holdings is recorded as having owned these properties since 2009, and has racked up a number of violations, including the following:

RESIDENCE ALTERED AS OCCUPANCY FOR A DWELLING FOR MORE THAN THE LEGALLY APPROVED # OF FAMILIES. BUILDING DEPT. RECORDS INDICATE BLDG AS MULTIFAMILY DWELLING W/ORDINARY CELLAR NOW IN CELLAR A CLASS A APT.IS CREATED (2009)

WORK W/O PERMIT; ILLEGAL WORK NOTED ON 3RD FLOOR RECONFORMED LAYOUT OF APARTMENTS ON 3RD FLR AS PER HPD RECORD APT WERE DESIGNED AS RAILROAD DESIGN SO BOTH UNITS CAN HAVE ACCESS TO FIRE ESCAPE. NOW APT 3F HAS NO (2012)

FAILURE TO MAINTAIN BLDG WALL(S) OR APPURTENANCES. NOTED: EXTERIOR WOODEN 2' X 4' AT THE ROOF LEVEL ON THE FACADE IS MISSING ABOVE THE MAIN ENTRANCE & SPALLING ... (2012)

Most violations have been resolved, but there are still two open Failure to Comply violations at 168 20th.  There are too many DOB complaints to list here, and besides, there are no means of verifying their accuracy, but they're interesting reading.  Here are a couple:

THERE IS A WATER LEAK COMING FROM THE CEILING OF THE BARBERSHOP.  IT CAUSED FLOODING IN THE BARBERSHOP AND DESTROYED HIS SHOP. LANDLORD HAS NOT FIXED THE LEAK AND HAS BEEN NOTIFIED MANY TIMES (2013)

A WORKER WAS JUST INJURED WHEN A WALL COLLAPSED (2014)

A caring developer?  You decide.


Posted by onemorefoldedsunset at Tuesday, September 01, 2015