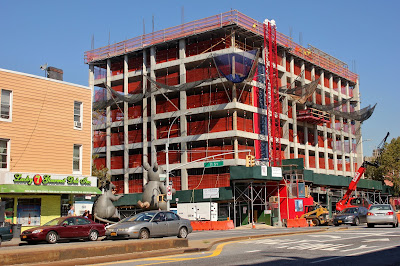 The inflatable rats are out at 470 Fourth Avenue, the Adam America development at Fourth & 11th, where union members are campaigning on behalf of laborers at the site in their drive to unionize.  Laborers report low wages, unfair dismissals, harassment & unsafe working conditions while working for the Red Hook Construction Group, builders at the site.  Since laborers at 470 threatened to unionize, RHCG has allegedly raised their pay, and offered a 401K plan, & sick days, but workers still feel vulnerable & poorly represented without union support.  They will be voting to join LiUNA Local 79 (Construction & General Building Laborers) tomorrow, at the RHCG yard at 121 12th Street, from 4:30 am to 6:30 am, and from 4:30 pm to 6:30 pm.

Let's hope our elected officials will support the laborers.  This could also be a campaign for the yarn-bombing, woollen-graffiti-crafting Forth on Fourth committee to get involved with.  How about it? 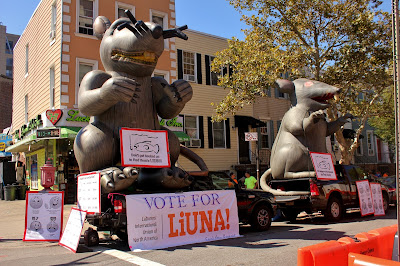 Posted by onemorefoldedsunset at Thursday, September 17, 2015