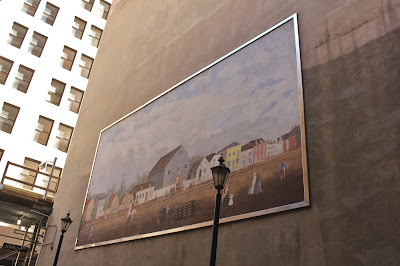 In Brooklyn, a Protest Mural Draws Its Own Protest (NY Times)

We Asked You to Draw Your Own Neighborhood Map: Here Are the Results (DNAinfo)
An interesting project, but I doubt it reached a good deal of older local residents, who don't spend much (or any) time online, but would have valuable information to add.  In the case of Park Slope, an on-the-street survey conducted below 16th Street might offer up quite different results.  Older Park Slope once stretched farther than many would imagine. The 1939 WPA Guide to New York City maps it as extending all the way down to 39th Street.  I don't expect many people today see it as going that far south, but I'm sure a good number of old time residents still believe it goes well into the twenties, at least, or even a little farther south.

The Daily News Layoffs and Digital Shift May Signal the Tabloid Era's End (NY Times)
“All that corny stuff about The News — how it’s the voice of the working people, the heart of New York — it’s all basically true,” Mr. Daly, the former columnist, said. “Every day it would prove that the common man and common woman weren’t so common. That actually, commonness is found more often among the rich and that distinction was found more often among the people who would buy The Daily News.”


Posted by onemorefoldedsunset at Monday, September 28, 2015