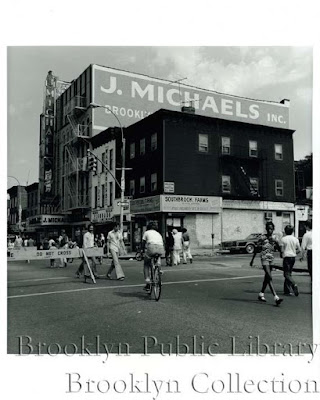 Here's the corner of Fifth and 13th in 1978, when the corner deli was Southbrook Farms. In an 80s tax photo you can see Alberto's there, and next to Alberto's the same Frank's Unisex sign that's up today.  Back in the 40s the corner store was Smitty's, which sold furniture, used radios & refrigerators, and in the 20s the Sunset Radio Company occupied the space.  The earliest references to 513 I could find were in NY Times & Eagle articles on a police raid at the building.  In 1900 John Nellis's saloon operated here, but the target of the police raid was a room above the saloon, where a gambling den known as the Prospect Club operated.

The hoodoo number had much to do with the raid.  The hotel of Nellis is at 513 Fifth Avenue, the raid was made at thirteen minutes past 1 o'clock, and thirteen packs of cards were listed with the loot that the captain and his men carried away from the place.  Nellis declares that he does not know what the room was used for.
(Captain) Reynolds had information before he was long in the precinct that there was a crap, roulette and card game running at the place and the proprietor was Ike Thompson, well known as a bookmaker.  (Brooklyn Eagle)


Posted by onemorefoldedsunset at Thursday, September 10, 2015