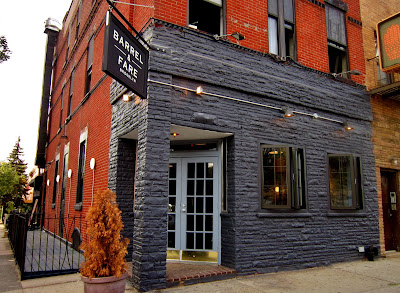 The new restaurant at Fourth & 12th now has a name. Barrel & Fare is in soft-opening mode right now, with a formal debut coming in a couple of weeks. Until the formal date, you can check by on a day-to-day basis.  If they're open that day, service will start at six, with a limited menu of food, along with beer, wine, and a couple of sample cocktails. Soft-opening prices are in effect. The tentative menu down the line will include a raw bar, salads, a charcuterie board, appetizers (including mini lobster rolls, short rib empanadas, scallop ceviche wraps), & entrees mostly in the twenty-dollars range (risotto, steak, pasta, fish, chicken, burgers & more).

Barrel & Fare is across the avenue from French bistro Olivier, which opened in 2013.  Unlike nearby Breadfruit Tree Cafe, with a menu that caters to a diverse, quick-moving, daytime crowd, these two restaurants bring a higher-end, casual-chic dining experience to Fourth below 9th. Though they took a little longer to get here than you might have expected, their arrival was inevitable.  Look at the change of the avenue's demographics. Two bistros on one block might well be the tipping point for food culture on this stretch of Fourth, accelerating changes farther south. Tamales or truffle fries? Place your bets.

1920 Richmond Bar Inc. has applied for a liquor license at 273 13th, formerly home to the Brooklyn Voodoo Lounge, and before that the metal bar Lucky 13 Saloon  The bar's name will be Paddy's of Park Slope.

For anyone missing the restaurant Mezini, there may be good news! The other day I came across three burly men in front of the restaurant, and one of them (the owner) told me the place would be reopening soon "a little differently."  On that tantalizing note, we'll conclude.

Posted by onemorefoldedsunset at Sunday, September 27, 2015