Almost a year ago we learned of plans to open a daycare center at 511 Fifth.  The opening of the daycare, Christofer Bear Advanced Early Learning Center, initially projected for the summer of '15, seemed plagued by delays, and in September South Slope News reported that landlord and licensing issues were causing problems for the new business owner.  It seems that the problems were not resolved.  All signs of the center's presence are gone from the storefront, and Ideal Properties, who brokered the ten-year daycare lease in January, have recently re-listed the space.  The listing's photographs still show the store as it was when occupied by the previous tenant, Malik Sportswear. It's listed at $10,000 per month - a Perfect Space for a New Eatery: Storefront in Park Slope!!

I'm assuming the national tenants referred to here are Edible Arrangements, and Capital One.  Save our souls. 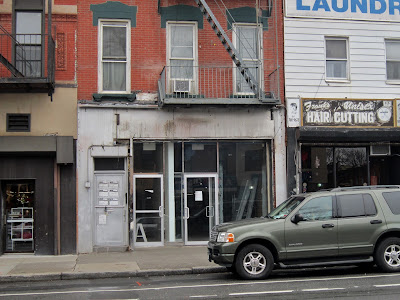 There'll be more changes on the block soon, what with next-door 513 on the market, and the empty 499 likely to see action.  Can we avoid more chains on this part of Fifth in 2016?  And please, can we once-and-for-all enact a national ban of the dreadful word eatery?  We live in (faint) hope.

Sad but not unexpected word from Sunset-Park.com that Milan's, the Slovak restaurant at Fifth and 22nd, will be closing around the end of the year, another victim of raised rent and changing demographics.  Milan has been on Fifth for twenty years. 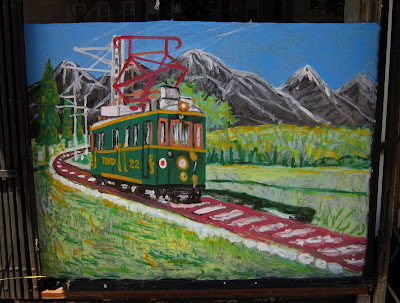 One of Milan's painted windows


Posted by onemorefoldedsunset at Monday, December 28, 2015