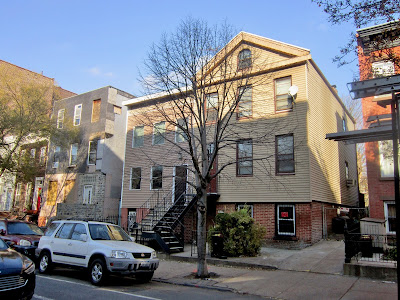 The year rushes towards its conclusion, but there's still time to squeeze in more wooden house demolition. 273 14th, between Fifth & Sixth, just got its marching orders.  The house was acquired in October for $1,800,000 by Unicorn Properties.  Unicorn made an appearance on the apparently-now-defunct wewanttobuyyourhouse.tumblr.com  (an offshoot of the now-apparently-defunct wyckoffheights.org blog), a collection of realtor mail solicitations.  Ah yes, so many familiar names! Plans for a new building have yet to be approved, but the rodent bait signs are in place.


Posted by onemorefoldedsunset at Wednesday, December 09, 2015