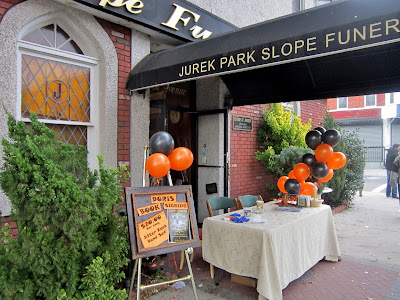 Outside the Jurek Park Slope Funeral Home, a book-signing!  Taking advantage of Marathon Day, and following, one assumes, one of those infamous wild-and-crazy Jurek Halloween parties, funeral director Doris Amen was out selling copies of I'm Dying to Tell Ya!!! - True Tales of a Brooklyn Funeral Director,  a warm & irreverent collection of essays on life in the death business.  Well, this was irresistible stuff. 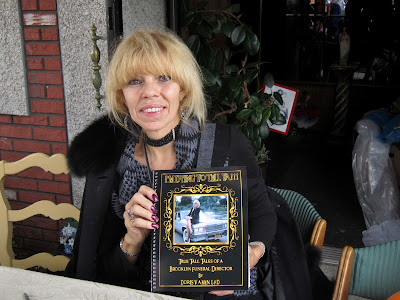 Amen, certainly quite unlike no other funeral director you've ever heard of,  has been working with her still-mostly-Polish client base for twenty-five years. If you like collecting books and ephemera on local history, this one, packed with priests, cemeteries, rowdy wakes & Caddy road trips, would be a fun (well maybe that's the wrong term ...) addition . The book's a brassy blast!


Posted by onemorefoldedsunset at Tuesday, November 03, 2015

Why not tell everyone how to get Doris' book?
I'm sure her stories are a riot.
Even though it's minus her voice, it'll be a scream nevertheless.