We walked over to Sunset Park, with a trip to Bush Terminal Park in mind, and while we were at it, a glance at Smorgasburg/Brooklyn Flea, in nearby Industry City.  I've walked around there plenty, and have visited I.C. a couple of times in passing - when I was last inside there things were pretty quiet. This time though, as we made our way down past Fourth, there were streams of other visitors heading that way too.  Industry City is the frontier base camp for Sunset Park gentrification, and the Smorgasburg/Flea combo the perfect venue for settler recruitment.  Aside from the physical space of the I.C. buildings though, the look and feel of the gatherings is clubby, upper-income hipster generic. You might just as well be in Williamsburg, DUMBO, or the Williamsburg Bank Building One Hanson Place as Sunset Park.  Madeover Brooklyn is nowhere at all, really.
We circled the markets, but the jars of organic horseradish, the customized Lego figures, the arch Hipster Mom bracelets. and the $35 Chinatown souvenir t-shirts (faded second-hand, sleeves removed) tempted us not.  And the food was expensive - we resolved to eat elsewhere in the neighborhood.  We left.

On the way to the park, we detoured down 39th Street, past First and headed round the back of some derelict warehouses.  A small group of guys were down at the water's edge, fishing, and way up high, a figure in a hoodie was busy at work tagging a building. 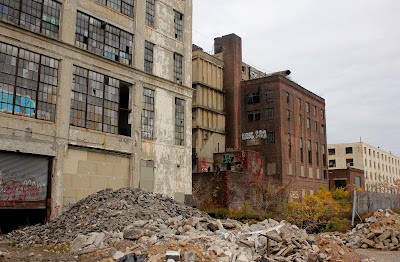 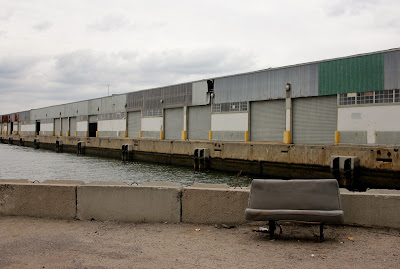 In the park itself, a ball game was in progress, and right at the end of a rock-lined walkway, a woman was crouched, brushing her dog.  Clumps of blond fur caught in the breeze and drifted like giant seeded dandelions.  A bunch of teenage boys were fooling around on the rocks, and every so often a park employee, watching from a distance, yelled at them to get back on the path.  They didn't take much notice. Later I took pictures for them on their phones.  In one they sat with their backs to the camera, heads bowed, and in others - a stock city skyline right behind them - they struck set adolescent poses, sweet with half-brooding/half-jokey machismo.

We couldn't believe it was November.  Despite the troubling implications of temperature, this was a day from heaven. The air was soft, the view unspoilt, and the sea smelt like real ocean. 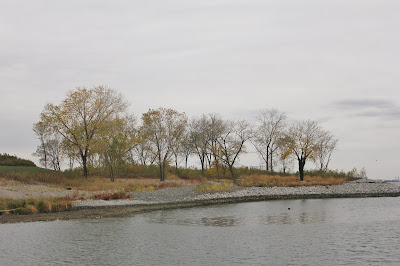 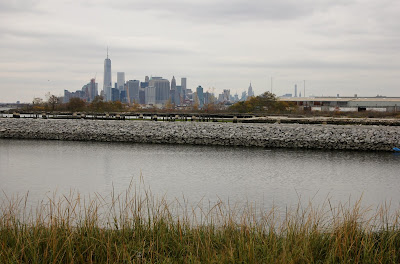 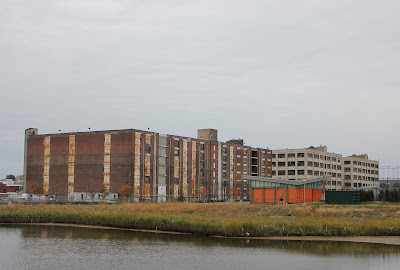 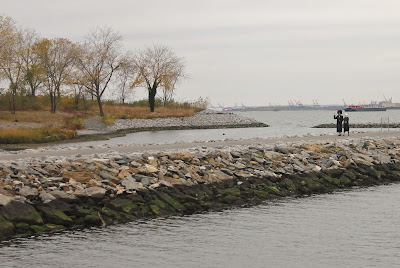 We wondered how this stretch of industrial waterfront would look a few years on. 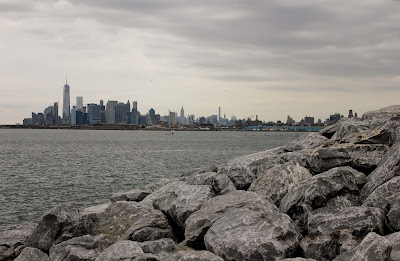 Posted by onemorefoldedsunset at Monday, November 09, 2015