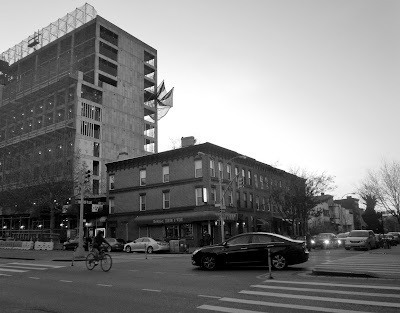 The City Council Subcommittee on Planning Dispositions & Concessions met today for its first hearing on the sale of the Brooklyn Heights public library at Cadman Plaza.  News of any outcome from today's meeting is not yet available.  The following terse and not-especially-informative email, sent out by Council Member Stephen Levin, arrived in my inbox the day before the meeting was to take place.

SUBCOMMITTEE ON PLANNING, DISPOSITIONS AND CONCESSIONS HEARING ON BROOKLYN HEIGHTS LIBRARY PROJECT
Wednesday, November 18th: 1:00 PM
Council Chambers, City Hall
Information on this project can be found on the Brooklyn Public Library's site here. Public testimony is invited. If you would like to submit a comment about this project directly to Council Member Levin, please use this form.

No mention of a library sale here, and direction to the BPL site (hardly an unbiased source) is not exactly neutral. As the library is in Levin's council district, his say on the proposed sale will have considerable influence, but while he has expressed reservations about it, he has not indicated what his final decision will be.

On a related library issue, the Brooklyn Paper reports on residents' reservations concerning the proposed library replacement in Sunset Park.  These include fears about limited library space in a new facility (which will also include affordable housing)  and lack of a firm plan for an interim library site.  Part of the funding for outfitting a replacement library are dependent on the sale of the Brooklyn Heights branch.

The developers would foot the construction cost, but the library system needs $10 million to outfit it with books and computers — that’s half the cost to build and outfit a new standalone branch, a library spokeswoman said.
The Brooklyn Heights branch’s controversial pending sale would contribute $8 million, and the library system would kick in the other $2 million, according to committee documents.
The Brooklyn Public Library and Fifth Avenue Committee will present their plan at a public forum at the Sunset Park Recreational Center on Seventh Avenue between 43rd and 44th Streets at 6:30 pm on Dec. 1.

Community Board 7 will meet this evening to vote on DeBlasio's proposed zoning changes - Zoning for Quality & Affordability, and Mandatory Inclusionary Housing.  The meeting will take place at 6:30 p.m. at 4201 Fourth Avenue.  You can read more about the zoning proposals and the response of other community boards thus far, below.

Posted by onemorefoldedsunset at Wednesday, November 18, 2015