Do You Love Kickboxing? 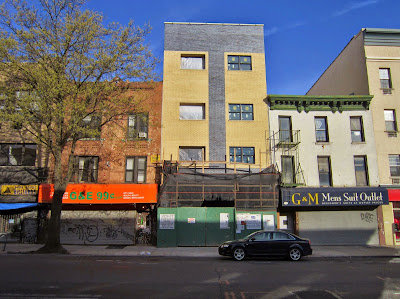 
Back in April I noticed that commercial space at 540 Fifth, the new building between 14th & 15th, was available for lease. Readers might remember that new construction at 540 slid by as an "enlargement," when actually the previous building on site was demolished. No permits for demolition or excavation were ever filed. Not so very unusual, perhaps. Anyway, according to the Commercial Observer, the first tenant in the new building will be international fitness chain iLoveKickboxing. iLoveKickboxing will occupy 4,500 square feet of the building (ground floor and basement). This part of Fifth is not short of martial arts-based studios, with Amerikick, Brazilian Jiu-Jitsu and United Tae Kwon Do all within a couple of blocks of 540, though the incoming studio looks it will lean more towards more upscale twenty and thirty-something fitness workshops than traditional martial arts training.


Earlier
Pricing Upon Request
540 Fifth: The Complaints Keep Rolling In


Posted by onemorefoldedsunset at Monday, November 23, 2015