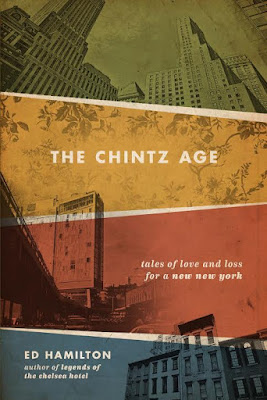 In seven stories and a novella, Ed Hamilton takes on this clash of cultures between the old and the new, as his characters are forced to confront their own obsolescence in the face of a rapidly surging capitalist juggernaut. Ranging over the whole panorama of New York neighborhoods—from the East Village to Hell’s Kitchen, and from the Bowery to Washington Heights—Hamilton weaves a spellbinding web of urban mythology. Punks, hippies, beatniks, squatters, junkies, derelicts, and anarchists—the entire pantheon of urban demigods— gambol through a grungy subterranean Elysium of dive bars, cheap diners, flophouses, and shooting galleries, searching for meaning and a place to make their stand.

Hamilton's stories examine the city in the context of gentrification, or, as Vanishing New York's Jeremiah Moss would call it, hyper-gentrification - an accelerated, corporate-driven stratagem to re-create both the city's landscape & its population.  They involve characters confronting issues we're all too familiar with  -  rising rents, closing businesses & a rapidly altering streetscape.


Hamilton's earlier book,  Legends of the Chelsea Hotel: Living with the Artists and Outlaws of New York's Rebel Mecca, is now in its eighth printing. He is also the author of the Living with Legends: Hotel Chelsea Blog, & has been a resident of the Chelsea since 1997.  You can read a Sunday Routine Times piece on Hamilton here.


Posted by onemorefoldedsunset at Monday, November 30, 2015