A block down from Eagle Provisions, boarded up, but with some of its signs still intact, more indications of change appear. 643 Fifth, which used to house Torres Tattoos (moved up the avenue a while back) & most recently, the short-lived I Want a Breast Pump (nobody did, apparently), is destined for demolition. This side of the block really typifies an older, lower-scale piece of Fifth Avenue retail, but it will be soon broken up by something taller. The building was sold in the spring for $2,250,000. The buyer? 5th Ave Condo LLC. So at least we know what we're in for.

I wondered at the time about next-door 645, which sold in May 2014, to 645 JC Coin Realty LLC, and had an inkling that the two buildings might share a common fate.  And so it came to pass.  A record of sale appeared today on ACRIS, with 645 flipped to 5th Ave Condo LLC for $2,000,000.  I guess we'll learn of the buildings' replacement soon enough. 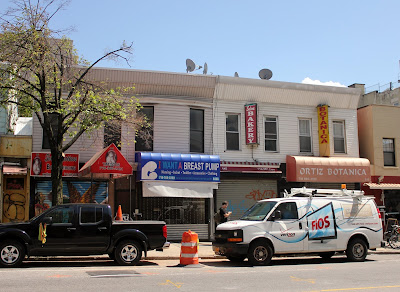 
Posted by onemorefoldedsunset at Thursday, October 08, 2015