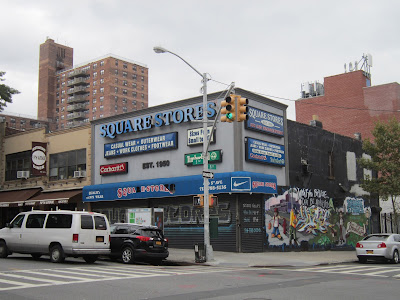 Square Stores (65 years in business) has been closed for a few days, but a woman at next-door Fifth Avenue Diner (43 years) told me that it should be back open this week. I hope so. This block of Fifth, on the west side between 8th & 9th, has stayed much the same for decades.  In addition to Square Stores & the diner, there's Smith's (83 years), the last blue-collar bar on Fifth, & next to Smith's, Tip Top Gift, on Fifth since at least the early eighties, with what looks like its original sign intact.  The Chase bank at the corner, hardly an institution to wax lyrical about, is a bit of a baby. It replaced a Manufacturers Hanover Trust in '86, and stands on the site of the old Michael's.  That leaves only the deli in the middle of the block, which has been around in some sort of grocery incarnation or other for many years.  I wonder if any other stretch of businesses around here has stayed so essentially intact.. Across the avenue, the block's seen change, but hey, the liquor store's a peer of Smith's, & defying closure the great Record & Tape Center (44 years), has been on Fifth since '65. The block's got the lock on staying put.  For now, for now.


Posted by onemorefoldedsunset at Tuesday, October 06, 2015