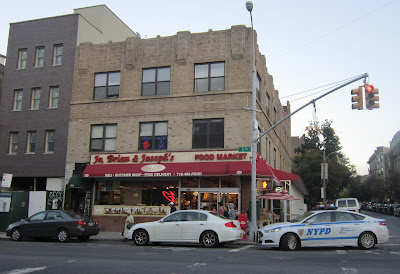 Around lunchtime today I noticed a police car stationed at Fifth & 12th. When I returned along Fifth a few hours later, it was still there.  I asked the police why they were there, & they told me they were guarding the white Infiniti that was parked at the corner.  South Slope News reported today that the car was linked to three arrests made this morning, and updated its story with further information from the NY Times.  According to the Times, the car is connected to Monday's fatal shooting at Manhattan nightclub Motivo.  Suspect Dalone Jamison was one of those arrested this morning, when the car was spotted by the police.

“They had information on who he might be hanging out with,” the official said. “They had a license plate number” of a car they believed he was using. The police said the gunman had fled in a dark-colored BMW after the shooting.
On Monday, the department learned the license plate had been picked up by several license plate readers that the police maintain around the city. They tracked the vehicle to Brooklyn. Then, around 10 a.m. on Tuesday, a Warrants Squad officer spotted the car around 10th Street and Fifth Avenue, the official said, in the Park Slope neighborhood.
Mr. Jamison was with two other men inside the car, the police said. “We identified him right from the club,” the official said.
“We knew who we were looking for.”
The other men with Mr. Jamison were questioned on Tuesday, the official said, and the authorities were seeking a warrant to search the car. 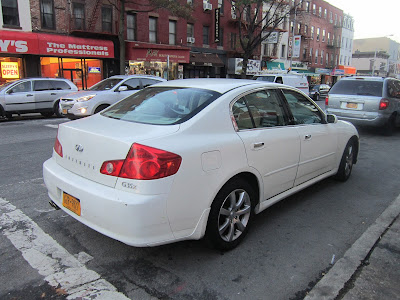 I've no idea how long it takes to obtain a warrant in these sorts of circumstances. As of 8:00 this evening, the police are still at the corner, and the car is still parked in front of Jo, Brian & Joseph's Key Food Market *.

Posted by onemorefoldedsunset at Tuesday, October 13, 2015