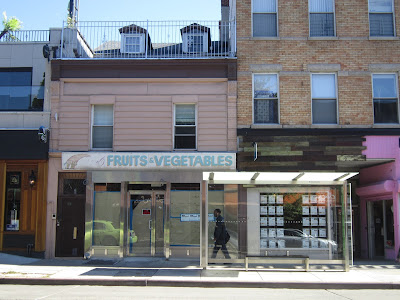 I was walking up Fifth the other day, and I noticed that Paul's Fruit & Vegetables, at no.41, appears to be have closed.  I always liked the store, with its fading, hand-painted sign up above its green and white striped canvas awning. Vestiges of older times.  Whenever I passed I was relieved to find the place still hanging in there. Now there's an anonymous new-look storefront, with the brown paper treatment in place. The building itself is a treasure, a dormered, pitched-roof frame that appears on the 1880 Bromley map of Brooklyn. 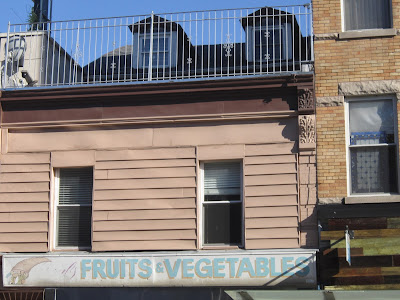 A wooden building is something of a rarity on this stretch of Fifth, now overshadowed by Atlantic development. 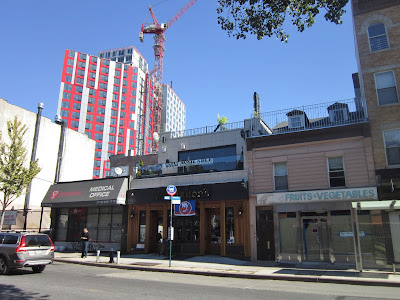 Happily, it doesn't look like the building's going anywhere right now, but I'm sorry that Paul's has departed.  There'd been a vegetable/grocery store right at that spot since at least as early as 1921. Next door McMahon's used to be O'Connor's, a timeworn gem of a bar.  You can see 41 from a side angle in this Google view from 2007, 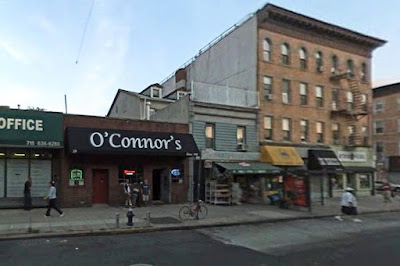 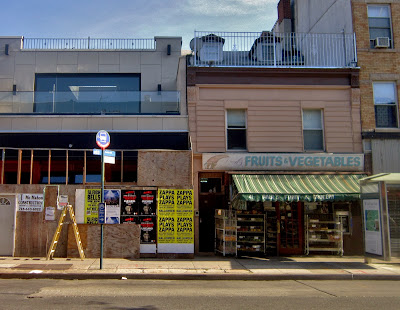 While digging around, I found that Montrose Morris wrote a piece on this Fifth Avenue block (Dean & Bergen) earlier in the year. As usual, MM's article is thorough & informative. She pays particular attention to 41, and - great coincidence! - discusses the work of PL Sperr. You can read her Past and Present Brownstoner piece (with Sperr photograph included) right here.  As Morris notes in her article, 41 was a smaller building originally. 1880s maps show the original, pitched roof structure set back from Fifth Avenue, but the 1916 Hyde map includes an addition at the front of the lot, used for commercial purposes.

Posted by onemorefoldedsunset at Tuesday, October 13, 2015