Here's the map I mentioned the other day. It's in the 1939 WPA Guide to New York City, an indispensable book for anyone interested in city history. 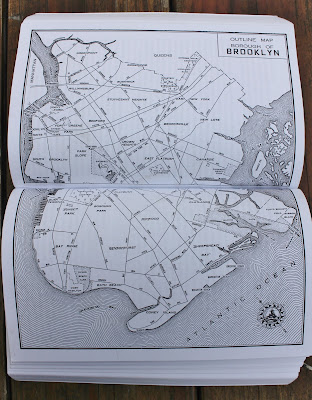 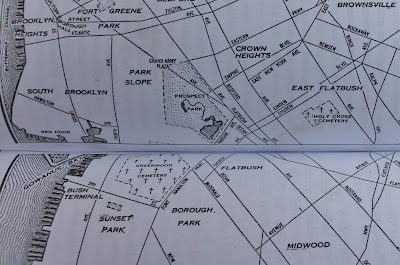 Quite a different looking set of neighborhood boundaries then.  Windsor Terrace?  Kensington? Prospect Heights?  Carroll Gardens?  Nowhere to be seen.  Of course, time changes names and neighborhood limits. And they're all open to debate.  Really you live where you & your peer group think you live, more or less.  You make your neighborhood. Over on the Windsor Terrace-based Container Diaries, one Roll Call commenter writes that "Back then," in the 50s & 60s, "it wasn't Windsor Terrace. It was Park Slope," & another writes that "Farrell's is what makes Park Slope special." Clearly boundaries felt different then, but how do younger Windsor Terrace natives feel about them today?  Windsor Terrace isn't one of those recent neighborhood re-brandings, like Cobble Hill, or newer still, Greenwood Heights. The (smaller) Village of Windsor Terrace was incorporated back in 1851.  I am far too new a Brooklyn resident to see much of Windsor Terrace as Park Slope (though to me, the cut-off's hazy), but I'm long enough here to believe in a Slope that goes well beyond the expressway.  And talking of that expressway, was its construction, in the 50s and 60s, part of the process that changed the common conception of just where Park Slope and Windsor Terrace began & ended? Thanks again, Mr, Moses.

I'd be happy if Park Slope were either bigger or smaller.  If it were smaller, I wouldn't be in it - the South Slope part, that is - and that would be just fine by me.  Liberating, in fact!  Park Slope could be a more concentrated landmark brownstone nexus, with its boundaries shrinking to the south & west. Or, if it were bigger, and went all the way down to 39th, just as it's depicted on the WPA map, that would be OK too. How much more diverse & appealing a community it would be, and how much less snotty rarefied in connotation.  Dreams, merely dreams!

Posted by onemorefoldedsunset at Thursday, October 01, 2015

I'm not sure if your comment that "Greenwood Heights" is a recent branding is ironic or not, but in case you were unaware there is evidence to suggest that some used that name for the area that would become Sunset Park before the park was built. For example the church that used to be at 7th Avenue and 41st St was named the Greenwood Heights Reformed Church (though some other sources claim that Church resided at 45th st, possibly it moved?).

No, I wasn't being ironic, and was probably going a little too far! You're absolutely right that there is a history of that name associated with the area, and as well as the church you mention there's also the Greenwood Baptist Church, which used to be at Fourth & 15th before it moved to Seventh & 6th. Certainly there are references to Greenwood Heights organizations, & an elevated area of land around there, but it was not used as a real neighborhood name until recently, nor does it appear on any older maps. You will still find a lot of older residents that firmly believe this area is Park Slope, and others who say that it's Sunset Park. None of them ever called or calls the area Greenwood Heights. I've been here for thirty years and we always thought Park Slope went through the twenties or even farther - right up to 34th, say. Of course, places evolve, and successive generations become accustomed to new names. There can't be a right or wrong. I do wonder if the Expressway, on top of displacing so many families, helped to displace the traditional borders?

Oh, I have no question that no one living today would call that area Greenwood Heights, I'm more speaking of the names of the area before the parks were even built. Another lost name is Linden Heights, which appears to have encompassed the a chunk of what is now called Sunset Park from 10th Ave to 7th Ave in the mid 40s.

Thanks - I didn't know about Linden Heights. I'm fascinated by the old names of New York neighborhoods or districts - Little Syria, Harsenville, Yellow Hook, Pigtown, Finn Town ... there are so many. Or even smaller plots of land - Sunset Park as Goat Hill. I'm also interested in how much farther Gowanus extended south originally- another example of neighborhoods shifting. We're lucky to live in such a historically-rich area.