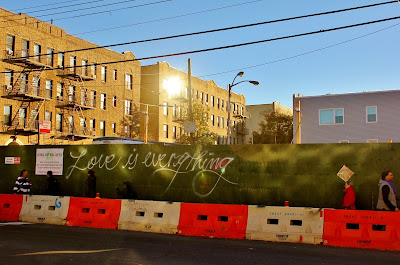 I've spent a lot of time in Astoria/LIC recently. I got engrossed in the Frederick Wiseman retrospective at the Museum of the Moving Image, and saw several of his New York documentaries. I also attended the Wiseman interview there last week, which included clips from his upcoming Jackson Heights movie, opening at Film Forum next week. In a typically trivial way, I was enormously pleased to be right behind Wiseman in a coffee line, before the evening's event began.

Right now I'm cat-sitting in Astoria for family members off to Warsaw, Berlin & London (lucky them). It's good to be in Queens though, and somehow all the Wiseman-watching just crystallizes the pleasures of walking here. Even a few blocks of Broadway offer up a buzz of energy. How beautiful the mix of age, language, race, class. How beautiful the absence of airs. Sure, the architecture of the street, between 31st and 21st, is nothing remarkable - a mixture of solid twenties or thirties architecture broken by ugly-as-hell Fedders-embossed newcomers. But it's people that make the city.

Sometimes I like to stop at Bakeway, grab a pistachio cake and coffee, and sit on a bench out front and watch the proverbial world walk by.  Today, instead, a booth at the Bel-Aire, with a Russian waitress on top of her game.

The C-Town on Broadway is coming down, and King of Falafel (Yeaaah Baby!!!) decamped to 31st. I didn't go to C-Town much, but sometimes popped in for a few things when visiting the kids.  It was good for its hot dishes. In the golden, late afternoon light of fall, even a half-demolished grocery store acquires resonance.

Posted by onemorefoldedsunset at Saturday, October 31, 2015