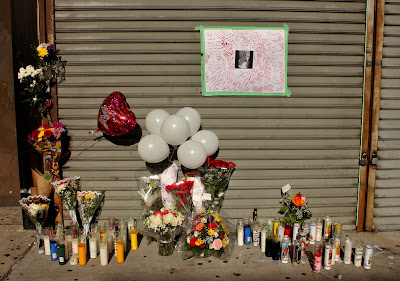 My deepest condolences to the family, friends, customers and employees of Francisca Figueroa, who died in Saturday's gas explosion in Borough Park. Her body was recovered from the wreckage of the collapsed apartment building yesterday, and will be formally identified shortly. The cause of the explosion has not yet been identified, but is possibly related to the removal of a gas stove. According to press reports,  Ms Figueroa had recently lost a case against her landlord in housing court, and was in the process of moving out.
Francisca Figueroa's Park Slope beauty salon, Franchezka Unisex, at Fifth & 12th, has been a fixture in the neighborhood for twenty years. If you go to visit the corner there today, you'll hear countless tributes from passers by. There's a growing memorial at the shuttered salon, and at all hours, knots of people gather to pay their respects.  It's a heartbreaking scene.  Ms Figueroa leaves behind a grieving family of relatives and friends.  Ms. Sara Diaz (godmother to Ms Figueroa's youngest child), described her as

" ... a devoted mother to her three children — Lecha; Jose, 22; and Helen, 26 — and said she was a dedicated worker at her salon ...
“She was a good person, a caring person, a workaholic,” she said, standing with her husband, Frank, at the intersection of 13th Avenue and 42nd Street opposite the wreckage.
She said Ms. Figueroa had been on the phone with her sister when the explosion happened.
“I think her sister had another call and she told her, ‘Hold on, Francisca,’ ” Ms. Diaz said. “And when she came back to the phone there was nobody on the phone.” 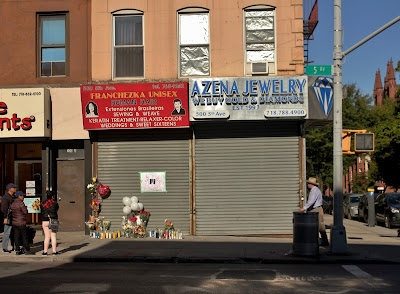 An explosion that killed two women and leveled a building in Brooklyn in October was intentionally set by one of them using gasoline that had been poured on the stairwell, a New York City official said on Friday.
Investigators have determined that Francisca Figueroa, a tenant in the three-story building, set the fire, according to the city official, who spoke on the condition of anonymity because he was not permitted to speak publicly about the case.

This is an especially tragic & hard-to-conceive verdict for the families, tenants & all others who suffered losses of loved ones and homes in the Borough Park explosion.   A terrible ending.


Posted by onemorefoldedsunset at Tuesday, October 06, 2015