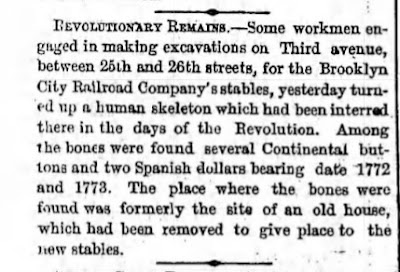 The other day I came across this little nugget of news, and I started wondering just whereabouts on Third the excavations had taken place.  Could they have dug at the location where Rossmann Farms now sells its discount fruit & veg?  Or maybe the skeleton was found at the spot where the once-lovely but now defaced late-(19 760 Third stands?  I then amused myself by thinking that the body's final resting place might have been be on the other side of the Expressway, right under the future 25 adult video store, or more soberly, perhaps, under Safety King uniforms & supplies.  I'd walked around there plenty of times, and the story got me intrigued.  I had to do a little digging myself.

The Brooklyn City Railroad Company was chartered in 1853, twenty years after horse-drawn street railway cars were established in New York, and by 1854 the Third Avenue line from Fulton Ferry was up and running.  Later in the century the BCRC became electrified.  The company was bought out by the Long Island Traction Company, and later acquired by the Brooklyn Rapid Transit Company (BRT).

The stable building mentioned in the Eagle article was built on the east side of Third Avenue, taking up a whole avenue block and almost half of the lots along 25th & 26th.  This is the site where the skeleton was found in 1857. Here are maps from 1880 -1903 (NYPL Digital Collections), showing the stables' exact location, and subsequent use of the building, presumably after the line was electrified. 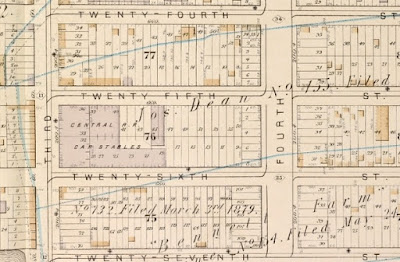 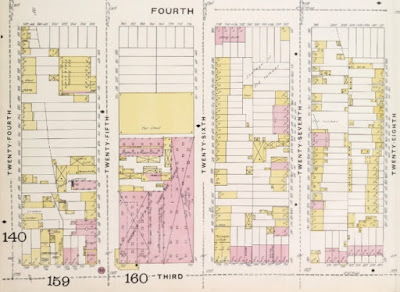 By 1898 the streetcar stables appear to be no longer in use, 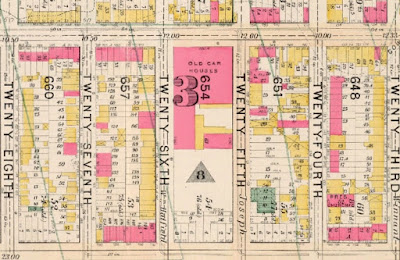 
and by 1903 the buildings are being used for other purposes. The largest portion is taken up by the Robt. Graves Wallpaper Company, with two other sections occupied by National Express Company stables, and a sash & door business. A separate, fourth building, on 25th Street is indicated H. Hanson (Manson?) Kindling Wood. 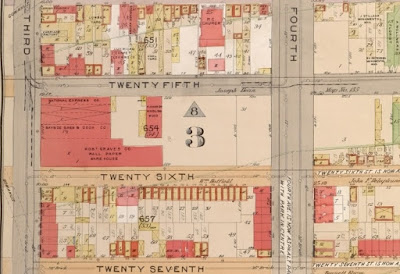 Of course, by 1941, a strip of the housing on the east side of Third Avenue was removed during the construction of the Gowanus Parkway.  The Google Earth view of the site today shows the same general shape of the stable buildings, but a good chunk of the original building has been removed removed.  At the time of its partial demolition, the building housed a box company. 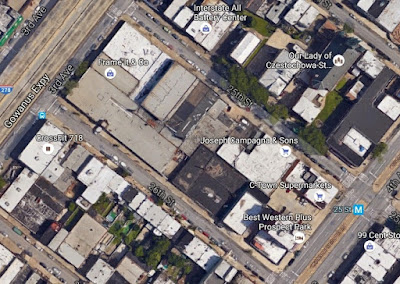 The different roofing materials here appear to mark separate property owners and businesses on the site.  Let's go down to street-view level.

The building at the SE corner of Third & 25th is lower than the building at the NE corner of 26th, and appears to be twentieth-century.  It may have had some details removed, but it looks like a pretty standard low-slung industrial warehouse of the 20's or 30's.  A replacement, it seems, for this portion of the stables. 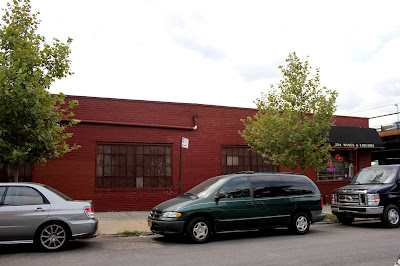 At the corner, the liquor store has mini neon hearts and a woman's profile.  In the same building, and right next-door, the adult video store attracts a quiet but steady crowd. 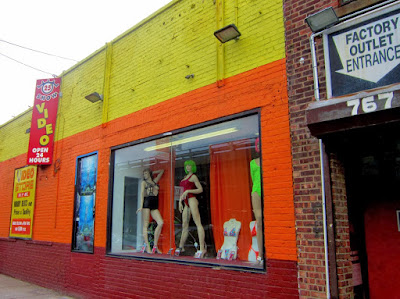 While I passed by yesterday, a middle-aged man emerged, cleaning his hands with sanitizer.  An unappealing presence indeed.  Next to the video store, a taller building, which extends a good way up 25th, houses a framing business, Safety King, and Venus fire protection extinguisher services. 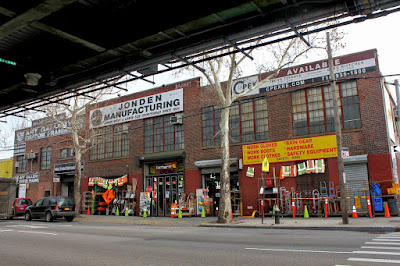 The picture above was taken when the building was up for sale. It sold last year for just over eight million dollars.  The facade of the building on the avenue side is presumably post 1941 addition to the older building, and she can see the difference between the twentieth century & nineteenth styles of architecture when you head up 26th.  Look at this! 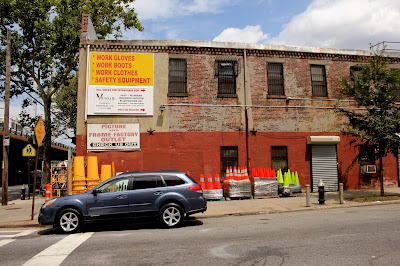 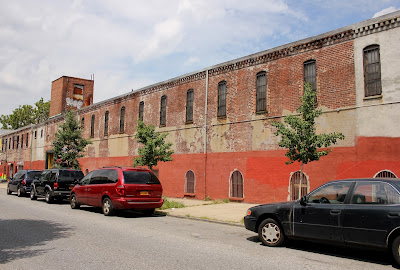 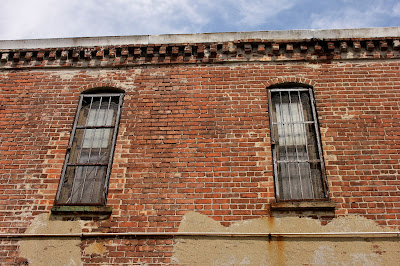 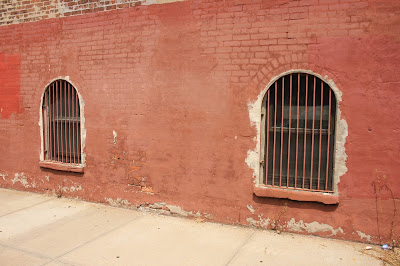 I've always admired this building, but I've never thought about its age. Surely it has to be a sizable portion of the original 1850's street car stables?

26th is a fine old mixed-use block, even though it's marred by an ugly Best Western at the corner of Fourth. John Hlad plumbing & heating is on the block, and I hope The Kingdom of Distribution (a business name I love) is still there, though I forgot to check this time. The southern side of the block is mostly residential, and mostly frame. If you look back at the maps above, you can see that most of the wooden houses appeared in the 1880's, though several are older.  They all sit close to the street, and when I walked by yesterday, looked cheerful with flags flying, and barrels of flowers on the sidewalk. 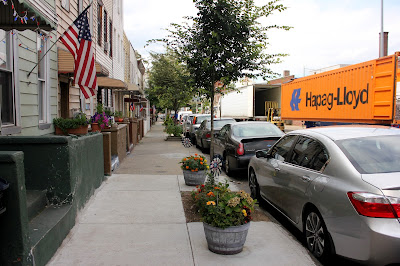 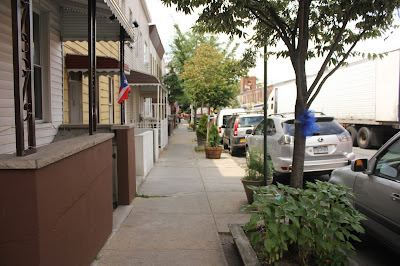 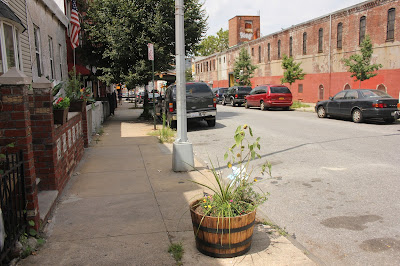 The old Gowanus Road ran close by here, meandering along what became Third Avenue, and was still indicated on maps long after its closure.  The Dutch Bennet-Schermerhorn House, first built in 1636, stood nearby.  There's more history here than you can conceive, and much of its keeps a low profile.

Note:  There's another Brooklyn Railroad Company building in the area, at Third and 58th/59th.  It was built in 1892, later than the one I assume still stands in part on 26th, and was used as a car barn. Historian Kevin Walsh has more about this building in one of his classic & encyclopedic Forgotten New York posts.  You can read it right here.


Posted by onemorefoldedsunset at Tuesday, August 09, 2016