Back in April a fire broke out at 561 Fifth Avenue, which was occupied by money & transfer business La Nacional.  A few days after the fire we noticed that La Nacional had moved two blocks up Fifth to share the premises of Judy Unisex.  and wondered if they'd move back again.  Now we know that won't be happening.  Today workers were busy putting up a new business sign.  A bold claim & a lot to live up to. 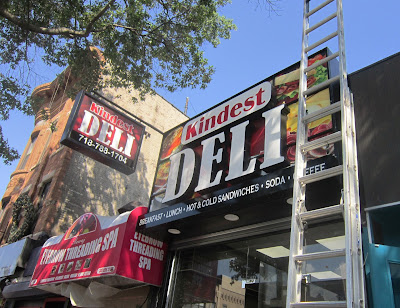 
Posted by onemorefoldedsunset at Sunday, August 14, 2016