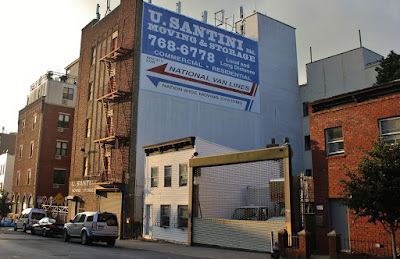 15th between Fifth & Sixth is one of my favorite blocks.  While block upon block of brownstones nearby are readily lauded for their architectural significance, a block like 15th seems to be of little interest to preservationists.  But in many ways it's far more significant, and its housing certainly pre-dates its neighbors up the hill.  In a neighborhood of mixed frame & brick buildings, 15th has a particularly good collection of early wooden housing, some freestanding & some attached, including a number of back houses.  Some of these buildings have been preserved or restored, and some rest behind stucco, brick or vinyl.  It's nice to see houses restored, but I'm not much of a purist, and I'm happy just knowing the old houses are there.  In fact, an extensive & expensive restoration job rather belies the whole value of what was once working & lower middle-class housing, occupied until recently only by working & lower middle-class residents. But I'll leave that one alone for now.

A walk down 15th will show you layer upon layer of history.  In 1880, the block consisted entirely of wooden housing, and it's likely some of the freestanding houses on the block had already been standing there for decades.  By 1886, one brick house, 268, had appeared on the block. A decade later, another brick building, 225 appeared, and it was flanked by two others by 1903. 223 is shown as a telephone company building.   Also by 1903, the brick building at the SE corner of Fifth & 15th has taken its place on the street.  By 1908, no other new brick buildings have appeared, even at the avenue corners.  By 1916, 230-2, marked as a wooden stable in 1899, & a wooden elevator company shop in 1903, is shown on the E.B.Hyde Brooklyn map as a (still wooden) vaudeville theater.  A warehouse building at 233  (apartments today) also takes its place on the street by 1916, as does the medium-sized apartment building at 270.

I love looking at the NYPL Digital Collection city maps.  They show the dramatic growth of the city in the nineteenth and early twentieth-century.  I wish it was easier to view Brooklyn street maps after 1916 online.  They're available at several sites, including NYU & Cornell archives, but you need an affiliation to subscribe.  I have to get down to the Central Library to look at the real thing.  So after 1916?  U.Santini, at 239 15th, has been in business since 1930, and that glorious deco warehouse must surely be the original company headquarters.  Several other small apartment buildings look to be of a similar vintage.  The age of the building on the NE corner of Fifth & 15th, about to become a Crunch gym today, is unknown (to me).  You can see it on archive photographs from the 1940's, but I can't find earlier references.  Pre-1920, I'd have thought.

In recent years, two modern apartment buildings have replaced a number of wooden houses, and a sleek glassy (attractive, I'll admit) house has arrived, but those original wooden homes that still remain give us a twinge of a feeling of how the block might just have looked in Whitman's time. Even the ones with more modern facades give themselves away with their size and their shape. 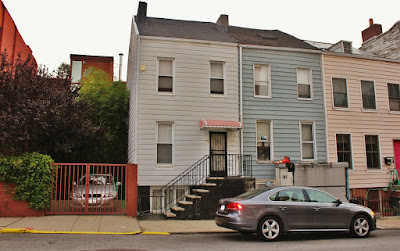 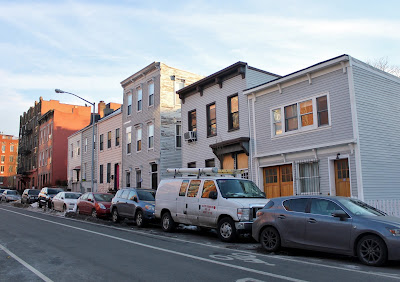 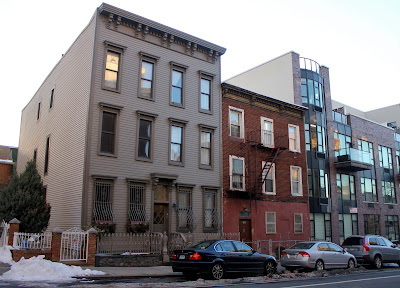 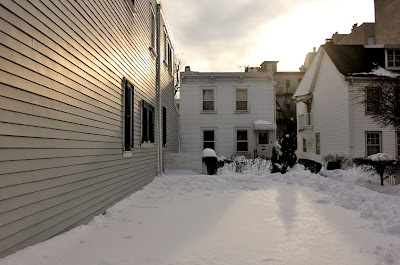 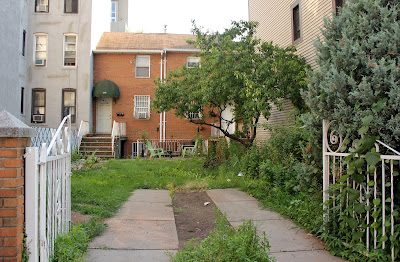 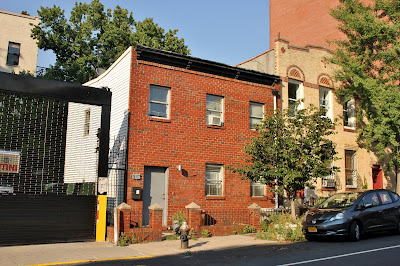 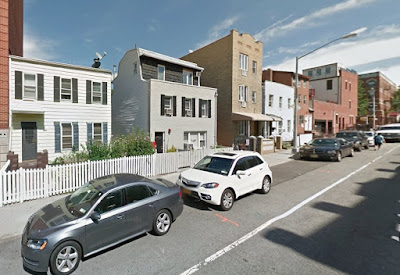 Here's a 1940 P.L Sperr photograph of "some very old frame dwellings" on 15th.  The view shows the north side of the street, looking south towards Fifth.  You can see wooden houses no longer around today, the U.Santini building, and the El on Fifth, which disappeared shortly after this picture was taken. 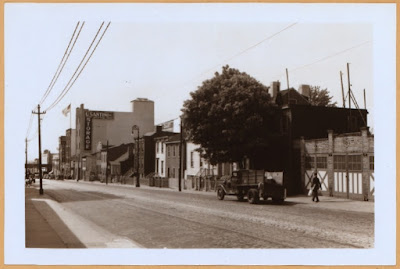 Posted by onemorefoldedsunset at Monday, August 01, 2016