I'm wary of raising the whole "neighborhood borders" topic again.  Clearly the names and demarcations of neighborhoods shift over time, and your notion of where you live is largely determined by your age and how long you've lived in your community.  Gowanus, separate from Brooklyn, covered a much larger area of land in the (17, reaching all the way down the shoreline to New Utrecht.  South Brooklyn's amorphous borders shifted south as Brooklyn grew and consolidated, and within it specific areas were as often referred to by ward number as by neighborhood name for much of the nineteenth century. The concept of Park Slope as a neighborhood develops in the late nineteenth century, with references made to property lots "on the park slope," (lower case or capitalized), or "Prospect Slope," generally referring to land very close to Prospect Park. Sunset Park starts to be used as a neighborhood name in the early 1900's, a decade or so after the park of the same was created. In both cases early references are used to denote proximity to a desired amenity, and the fine views on offer. The influence of realtors on neighborhood names, it seems, is hardly a modern phenomenon.

Greenwood Heights has only been used as a distinct neighborhood name in the last several decades, and many longstanding Sunset Parkers and Slopers still contest its use. Its name was sourced, logically enough, from its proximity to the land-marked Green-Wood Cemetery, and from earlier references to land elevations stretching from (what became) Prospect Park to (what became) Sunset Park. There's also a religious connection.  The Greenwood Baptist Church worshiped at Fourth Avenue & 15th Street before moving farther north, and the Greenwood Heights Protestant Union Church, later the Greenwood Reformed Church, established roots at Seventh in the 40's, though neither of these locations fall within the borders of what is considered modern-day Greenwood Heights.  A Greenwood Heights League & Greenwood Realty Co. were also active in the pre-Sunset Park in early twentieth-century.

I'm too new to the area (thirty years) to have any real authority in the matter of what/when/how a neighborhood came into existence.  I only have a specific sense of time and place.  Certainly I always thought Park Slope extended into the 20's, at least up to 24th Street.  People who lived in the high teens and 20's streets in the 1980s thought of themselves as Park Slopers, and/or South Brooklynites. This was certainly the case in earlier decades too.  In 1978 Park Slope native Denis Hamill wrote a piece on Park Slope for New York Magazine:  Park Slope: The Myth of Neighborhood, in which he catalogued the class and ethnic tensions that divided different sections of the neighborhood.  A map accompanies the text.  I've always seen the western boundary as Fourth, but otherwise the limits are pretty much those I recognized a few years later. 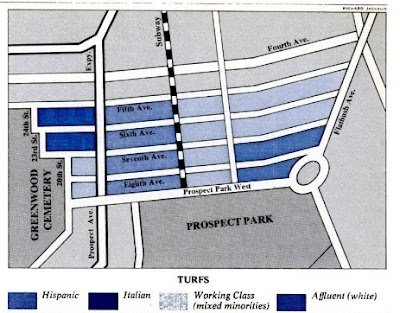 Hamill sees in the Park Slope of 1978 a microcosm of the city, in its mix of wealthy enclaves, solid, middle & working sections, and areas of real poverty, in its racial divisions, its drug territories, and its pockets of urban blight. His piece is one of classic Hamill indignation, and you might take issue with his tone, phrasing, or the targets of his wrath.  You might disagree with the fine lines of the "turf" borders, and you might dispute some of his other assertions, particularly if you were living in Park Slope in the 70's yourself and saw things differently, but nevertheless it's a powerful and thought-provoking  piece. I'd make it mandatory reading for all newer residents. While he acknowledges in the piece that some of the newer, wealthier residents have become civically engaged through block associations, PTAs and community groups, Hamill suggests that their involvement tends to be insular, and does not reach out to other areas of Park Slope.  He decries the urban blight caused by the displacement of 184, mostly black & Hispanic families due to an abandoned school development project around Baltic & Butler Streets.  He recounts stories of racial division: gangs fights between Italians (the Golden Guinea "prep-school for the Gallo mob") & Puerto Ricans, white home-owners' protests against a race-themed mural painted by Black & Hispanic kids, & the heroin corners disregarded by the cops. One of the demarcations Hamill recognizes in 1978 is 9th Street, and he writes of a poorer, traditionally Irish neighborhood below 9th (the one he grew up in) as now predominantly Puerto-Rican. He quotes a sanitation worker who works in the area, on the subject of cleaning Seventh:

"I shouldn't tell you this, and if you use my name I'm screwed, but we get our orders not to sweep up as often on this side of 9th Street.  That's not official policy of course, but the inspectors think it's just a waste of time.  No one comes down this way...  The people down the other way would complain."

Over at Bartel Pritchard Square, on The Hill, white kids guard a fiercely defended turf, with graffiti warning "WHITE POWER. NIGGERS BEWARE. DO NOT ENTER AFTER 6 P.M.," and a huge swastika.  Close by, 17th St. and Prospect Avenue are Puerto Rican gang strongholds.

Hamill also pays attention to a southern Slope Italian enclave in the high teens and 20's:

Most of the shopping is done in pork stores, cheese shops bakeries and vegetable stands that dot this section of Fifth Avenue.  The turf shares almost nothing with its neighboring district. The lifestyle is largely Old-World and peaceful, disconnected from the problems of the rest of Park Slope.

He sees this part of the Slope as the most stable, and the most resistant to change.  By the mid 80's  though, you could clearly see the Italian roots of the neighborhood, in lingering pasta stores and Italian bakeries, it was already far more diverse than the neighborhood Hamill describes, and also included a Polish community unmentioned in the New York article.

Hamill viewed the Park Slope of 1978 as a precarious & fragmented community - home to a pocket of luxury, but more broadly a poorer neighborhood, a victim of redlining, gerrymandering, displacement and media hype.  The Park Slope media image was one of renovated brownstones and gas lamps, while many of its poorer districts were invisible.  The divide was banal. He saw extremes of poverty, and simultaneously, more & more real-estate offices establishing themselves on Seventh Avenue.

The central problem of Park Slope - and of the city as a whole - is one of unification; the residents of the districts different turfs will have to see beyond their class and racial differences to identify their common enemy, the unaccountable power brokers both inside and outside the government.  If not, then their only common enemy will be each other.

Forty years on, is Park Slope more unified?  Certainly community organizations have been active in tackling issues such as housing preservation, crime, and fair wages. The Baltic/Butler demolition & subsequent abandonment that Hamill mentions in his '78 article- a result of the 70's fiscal crisis - was a catalyst for the formation of the Fifth Avenue Committee, and the FAC was incorporated in the same year. Its mission was to prevent the displacement of low-income and moderate income tenants, revitalize a depressed Fifth Avenue corridor, and tackle the problem of abandoned buildings and vacant lots.  The organization continues to represent under-served residents in Park Slope, Red Hook, Sunset Park & neighboring communities today.

There's no denying, however, that much of Park Slope has become uniform, which is another matter altogether. Park Slope weathered the 70's slump and became increasingly desirable. Houses prices continued to soar, and the area got rapidly wealthier and whiter.  Hamill may have pictured a fragile and divided neighborhood in the 70's, but despite issues of crime and drugs, in the 80's & 90's at least, on a South Slope block like mine, there was still a real vitality.  You could still live on a block that included Irish, Italian, Haitian, Puerto Rican, Dominican, Polish & Mexican residents & delight in its spirit.  And that's certainly declined.  People hang out in their front yards less. There are fewer eyes keeping watch on the block, and fewer neighbors at their fences, waiting to chat.  People have less time to dawdle, and retreat more readily to centrally-air-conditioned homes.   The area's more prosperous, but is diminished by its very wealth. Older residents feel the loss of community spirit and there are still residents, particularly at the borders of the neighborhood, whose voices are seldom heard above the perky buzz of Park Slope chatter.  And that's a shame.

And there are many, many, many more real-estate offices than even Hamill might have imagined back in 1978.

Posted by onemorefoldedsunset at Thursday, August 04, 2016

Lovely article - thank you! Makes me love my neighborhood even more

Curbed did a dive into the history and use of the Greenwood Heights name a couple of years ago, which has some interesting links. http://ny.curbed.com/2013/8/28/10204514/the-evolving-name-and-boundaries-of-greenwood-heights

I don't know I deleted my earlier comment, but thanks!