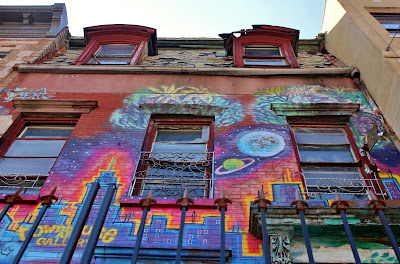 There'd been a little Twitter chat recently about a condo development at Second & Seventh, an apartment building that had previously belonged to local Dorothy Nash, and operated rather loosely for many years as a bar of sorts, and later as a boutique and art gallery.  The place fell into disrepair, and appeared little-used for years before it was sold, but it retained a certain totemic reminder of a somewhat less staid Park Slope, when artists and eccentrics who came in forty-plus years ago could, without being millionaires, find themselves a building, hunker down in it and follow their own, mysterious bliss.  Such figures are thinner on the ground these days, though the Nash family still owns a couple of other buildings in the area, a brownstone on Second, and another house on Fourth, close to Atlantic.  Both buildings are recognizably Nash - with their crumbling facades emblazoned in a riot of painted flora & fauna.  I imagine their condition is a headache to the neighbors, and I absolutely sympathize, but they do call out to their pristine land-marked peers, & whisper quietly, "You know, if only you could loosen up a little, imagine how much fun it just might be..."

Somewhere or other I had pictures of the two houses, but of course when I wanted them I couldn't find them.  But I happened to be at the Pacific Library the other day, so I nipped across the street to take a quick look at 46.  There was a gallery there for a while,too, but now the space is advertised for rent.  The signs may have been there some time.  It's a beautiful old building, and I love the murals that cover the facade, but the place is in poor shape.  The masonry is falling away and the mansard tiles are shedding one by one. There appear to be no signs of life within. 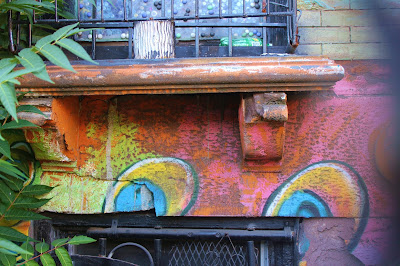 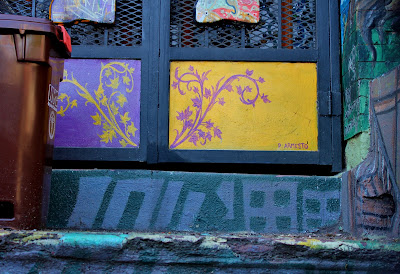 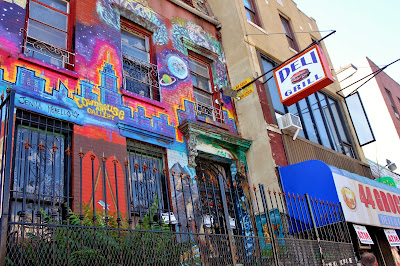 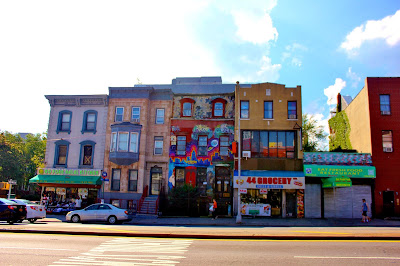 Posted by onemorefoldedsunset at Monday, August 15, 2016