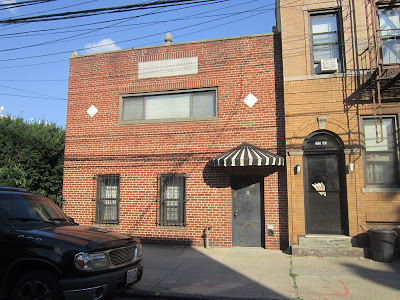 The Societa S. Clemente da Casamarciano once met at this Ravenswood building, The inscription on the building is dated 1947, & the society apparently left a good while ago.  Casamarciano is a municipality of Naples. 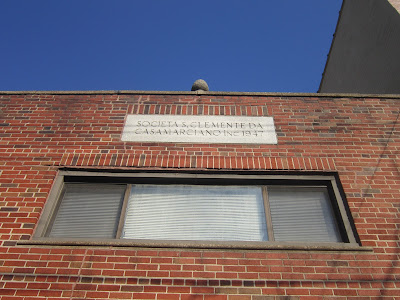 I walked past the Societa building the other day.  A few doors down, a surprise in the streetscape. Who was this distinguished figure, gazing with gravity over a garden hedge?.  You could only see his head & shoulders, but you could tell he was a cut above your average front yard statuary. 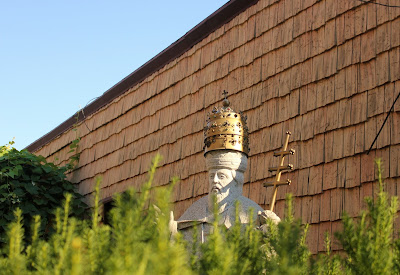 I stopped to take a closer look, and just then the owner of the garden came by. He invited me through the front gate to get a better view .  Could it be? Yes!  Here was S. Clemente himself (AKA Pope Clement I), standing on a brick plinth, which was also supporting an engraved granite plaque. The plaque bore the names of the Societa members who had paid for the statue. I don't know quite how the saint arrived in the garden, but the owner, who moved to the block a couple of decades ago, seemed to have inherited him, and he told me the block was all Italian once.  S. Clemente got lucky to have found such a kind and attentive custodian, who clearly enjoyed the holy presence.  He told me he regularly touched up the gold on the papal tiara. The Virgin Mary, however, a modest looking figure in a grotto nearby, was cared for by other hands.  His wife had forbidden him to touch her. 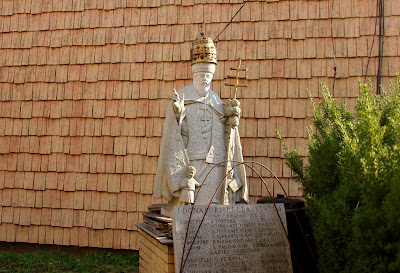 Posted by onemorefoldedsunset at Sunday, August 28, 2016