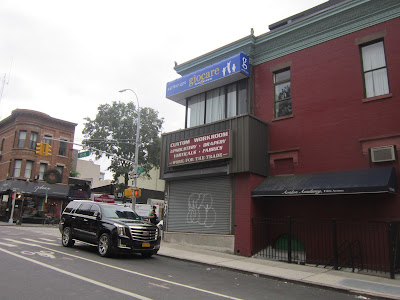 There are signs up for Giocare at Fifth & 15th, and it appears the well-regarded playschool moved from 18th Street to its new premises over the summer.  The first floor space on Fifth was previously occupied by Avalon Childcare, which closed in 2015, after a history of safety violations, and more recent allegations of abuse.  It's not clear if the center ever re-opened.  In 2011, a three-month old baby who attended Avalon Academy - a separate site on 15th Street run by the same owner - died after falling unconscious at the nursery center, At the time of the incident, criminality was not suspected.  A Daily News story on safety issues at city childcare centers, which was published early this year, included a look at both Avalon nurseries, both of which had checkered safety records. At the time of the story Avalon Academy was still open for business, & today it is still listed as open online, as is Avalon Childcare in Red Hook.

Farther north at Fifth & 12th, the ever-mysterious La Royale,(formerly Mezzini), whose presence on the avenue is intriguingly resilient,has been given a spruce up in recent weeks.  While the curtains there have been habitually pulled closed over the years, sometimes now they're pulled right back, and the windows are opened wide. Saturday was one of those exciting occasions. I noticed fresh shrubbery out on the sidewalk too, along with a length of artificial sod.  A couple of ladies whose relationship to the place was unclear - diners? friends of the staff? PR of some description - lingered on the sidewalk. The restaurant was empty inside, but at least there was a bit of a show going on outside. On Sunday afternoon though - a time you'd think perfect for summer business, the shop was closed. 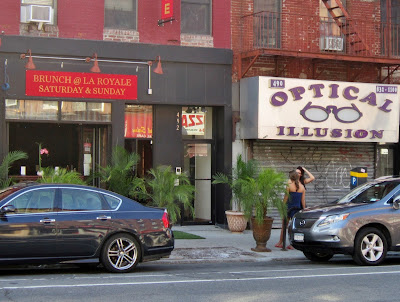 Across from La Royale at Jo, Brian & Joseph's Food Market (no longer Key Food), a large plate-glass window has remained broken for a couple of weeks or more, leaving a gaping hole and a patchwork of cardboard covering the window from inside. It's taking surprisingly long for this to get fixed, and I feel sorry for the cashiers whose check-out counters are right by the window. The corner store has had its ups and downs, but the current management is certainly better than the previous one, and the workers are very friendly. Hope the fix-up comes soon. 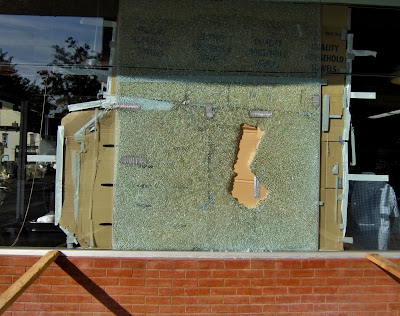 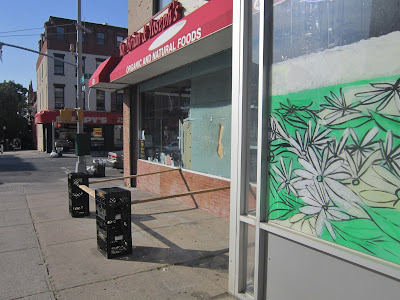 Posted by onemorefoldedsunset at Monday, August 29, 2016