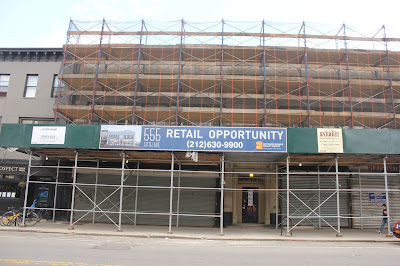 At the end of last week Park Slope Patch reported on the CB6 green light for a Crunch gym at Fifth Avenue & 15th Street.  Readers might remember that we wrote about the sale of the 555 Fifth building late last year, and noted the leasing of the building to Crunch.  According to the Patch reporter, an attorney for Crunch, Michael Nacmias, told the community board that "the fitness center would take up part of the building’s first floor, as well as its entire basement and second floor, but wouldn't displace most of the existing businesses in the property," and the reporter noted that "those businesses, including a grocery store, were closed Friday" (March 25th).

As we noted at the time there were no "existing businesses" at the time of the CB6 meeting, as they had all been displaced by January of this year.  These businesses included a corner grocery, nail salon, discount store & Aikido & Bikram studios.  Now a sign has gone up for ground floor retail space for lease at 555, and one imagines the rents will be considerably higher than those the previous tenants paid. 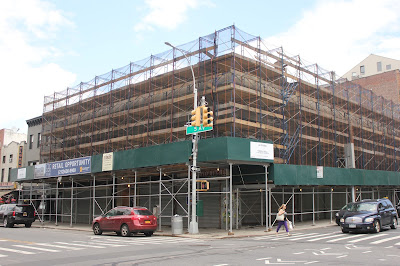 Posted by onemorefoldedsunset at Friday, May 20, 2016