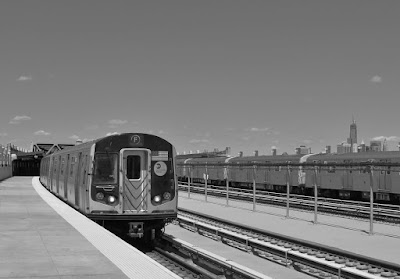 Prepare yourself for trains bypassing your station on your morning & evening commutes next year. Yes, the F is going express in 2017.  According to an article in the NY Daily News, the F will run express between Jay Street & Church Avenue during weekday rush hours, which will reduce commuting times ("6 to 7 minutes") for South Brooklyn riders, but mean a 50% reduction in service for riders at busy local stations that include Carroll, Smith & 9th, Fourth Ave. & 15th Street.  No additional trains are planned for the new service.
For an in-depth consideration of the pros & cons of F train express service (mostly cons), & other transit issues, read Benjamin Kabak's excellent 2nd Ave. Sagas.

Update: In a Gothamist piece, Council Member David Greenfield reveals that trial express service is set to begin this summer, with regular service to start in summer of '17.  Should be interesting to see if local politicians effect changes to the plan ...

Update Two (5/18)
On Wednesday, MTA spokesman Kevin Ortiz issued a statement to Crain's clarifying that Greenfield's assurances, based on a recommendation listed at the end of the aforementioned report, should be checked. "If we move forward with the F express," he said, "it will start in the fall of 2017." (Gothamist)


Posted by onemorefoldedsunset at Tuesday, May 17, 2016