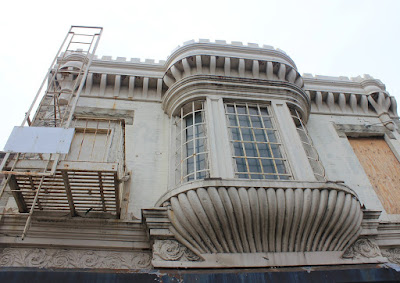 The picture of 760 Third Avenue, seen above, was taken in 2012.  I was struck by its ornate looks, which seemed unusual on that stretch of Third, and I wondered what the views were like from the second floor.  It was on the market that year, and the listing for it made me curious.  From a post at that time:

According to TerraCRG brokerage, this building ($875,000), at Third & 25th, is ready to  be "repositioned for retail, warehousing, parking, storage or can be converted into an art studio, gallery, or office."As an artist, you'd have interesting views.  From the back, sunset panoramas of city & ocean.  From the front, close-up scenes of traffic jams.  Imagine: the sour, grimacing faces of drivers, almost close enough to touch!  "The building is highly visible from the BQE with over 130,000 vehicles passing per day and located on 3rd Avenue which has over 30,000 vehicles passing per day. Great opportunity for accessory signage. "

760 sold that year for $800,000.  In 2013 plans were approved for an Alt 2 building renovation, but an application to turn the mixed-use building (light industrial/one family) into a non-residential property was not green-lighted.  Apparently work went ahead anyway, and the residential unit was dismantled.  We can't know what the changes looked like on the inside, but the outside alteration was certainly dramatic. 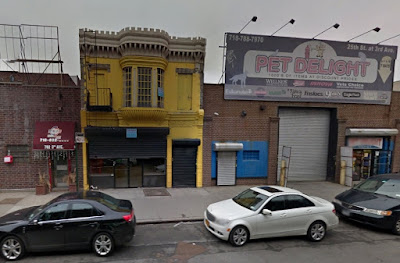 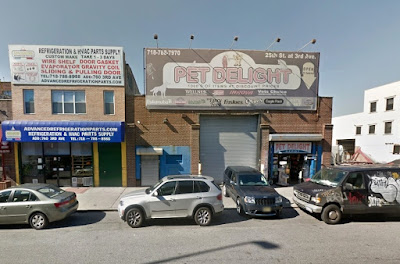 An SWO was placed on the building in 2013, for work non-conforming to plans.  It remains in place.

Now 760 is back on the market, for an undisclosed price.

It's a shame the period looks of the building vanished, and that the residential portion of the building was removed.  Whatever's left of the original building is not especially old; it was built in the 1890's, replacing a wooden building destroyed by fire.

An Overturned Lamp Causes Loss
A lamp was overturned last night in Stone Brothers' Tailor Shop at 760 Third Avenue, near Twenty-fifth Street, Brooklyn, and the one-story building was destroyed. Part of it was occupied by J.J. Nagle as a restaurant. The flames spread to 758 and partially destroyed a three-story frame building, owned and occupied by ex-Alderman Blohm.  The building at 762 was also damaged.  The loss to owners and tenants aggregated around $4,000, but all the losers held insurance policies.
(NY Times, March 7, 1891)

At the turn of the twentieth century, the brick 760 was still operating as a saloon/restaurant, and in 1909 a Thomas O'Rourke, listed at this address, was charged with violating the "dry Sunday" Excise Law, and "held in $1,000 bail, for examination."

The original, wooden building was smaller than the brick one that replaced it, and appears on the Bromley 1880 map as a stable.  But it must have had some other function by then, as in 1879 it was a polling address for the 5th District of the 8th Ward.  It stood right on the route of the old Gowanus road, which ran along the shore side of the property.  A couple of blocks south from here the Bennett/Schermerhorn house, originally built in 1636 & reconstructed after a fire in 1643, remained until the nineteenth century, and ten blocks farther south, "on the shore of Gowanus Cove" the De-Hart Bergen House, built in the 1670's and famously visited by the Labadist missionaries Danckaert & Sluyter in 1679-70, survived until its demolition in the 1880's.   The Gowanus Road itself was closed between the 1840's & 50's, but remained indicated on street maps until at least as late as 1916.


Posted by onemorefoldedsunset at Monday, May 30, 2016