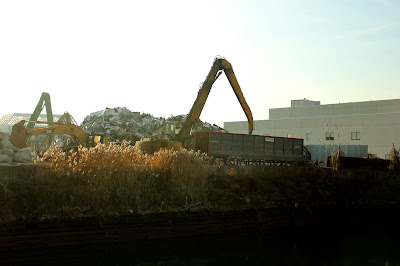 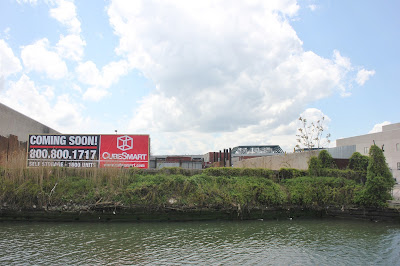 The canal-side yard of Sixth Street Iron & Metal has been cleared out, and the owners have leased the space to CubeSmart storage.  Just yesterday The Real Deal ran a story on the booming self-storage market, with developers buying out storage operators & Cushman & Wakefield announcing that "2 to 3 million square feet of self-storage space are in the pipeline." The Real Deal article also refers to the City's intention of tightening zoning regulations for storage facilities "because of the relatively small number of jobs the properties generate."

Yesterday I spoke to a genial employee of Sixth Street Iron & Metal, who was sitting in the street under a large patio sunshade, supervising workers at a warehouse across the street from the empty Gowanus lot. He said the lot was cleared out around three weeks ago, but that the company was still recycling non-metal materials non-ferrous materials*. 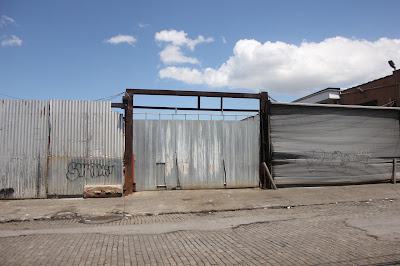 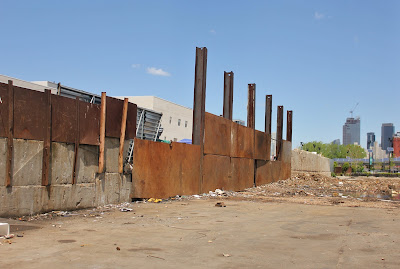 Sixth Street Iron was threatened with a lawsuit by Riverkeeper back in 2009, for alleged violations of the Clean Water Act and the Resource Conservation & Recovery Act.  These involved the discharge of toxic materials into the Canal, & the illegal dumping of fill & debris.  In a Times article of  2013  the company claimed to have filed the necessary plans & permits to rectify any irregularities.

CubeSmart is already an active presence in the city, with over twenty storage facilities, including one close to the canal at 338 Third Avenue.  Soon instead of scrap heaps there'll be another large warehouse on the waterbank - another element of the canal's mixed-use-surreal landscape: high-end grocery store, once hotly-contested parole center (what a storm of anxiety that one provoked!), lumber yard, cement works, high-end rental apartment complex et al.  I understand the drive to clean the water, but I do look back with a certain nostalgia to the time when the canal still served a largely industrial function, was not even remotely chic & when there were no Salted Crack Caramel ices to be consumed nearby.

Too many Gowanus posts to mention here, but here are several vaguely related ones:
The development of Second Avenue: There All the Time
Burtfest! Burt Reynolds in the Slope & Gowanus in 1970's movie Shamus
A short walk by the canal: Big City of Dreams

*DNAinfo has covered this story in more detail.  According to a recent article"the metal recycler no longer buys steel because of a downturn in the market, but still accepts "non-ferrous materials" such as aluminum, copper, brass and wires."


Posted by onemorefoldedsunset at Tuesday, May 10, 2016