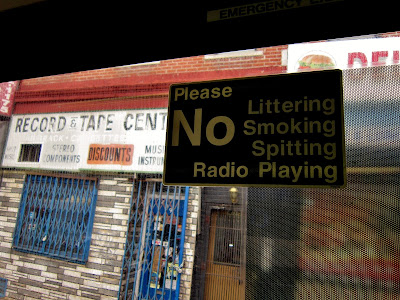 Though not quite dating to the era of the beautiful old Record & Tape Center storefront signs, this MTA bus notice does seem to reference another musical era entirely.  Who plays radios on buses any more?  I sometimes see guys in their sixties with boomboxes: carried on the street, stationed on stoops, or fitted in milk crates on customized bikes.  There's a blast of time travel for you,  In an unlikely moment, not that long ago, I even saw a teenage boy walking on Fifth with a shower radio held to his ear - fantastic!   But these are rare exceptions in the smart world.  Gotta revise the prohibition.

Update:  Talking of boomboxes though, this looks great:

On Thursday, June 16 at 8 pm, the Brooklyn Museum will host a conversation with artist Tom Sachs and drummer, DJ, and music producer Questlove. Moderated by poet Tom Healy, the two will discuss sound systems, the intersections between art and science, and their mutual love of music from across the globe.
From 6 to 8 pm, Brooklyn-based DJ Nemo Librizzi of KNOW-WAVE Radio and special guests pay homage to the streets of Brooklyn in the 1980s and 1990s on Tom Sachs’s boom boxes. The live DJ set will be in the Martha A. and Robert S. Rubin Pavilion and Lobby. The program is free as part of Brooklyn Museum’s Free Thursday Nights hosted by Squarespace.

Posted by onemorefoldedsunset at Wednesday, May 25, 2016