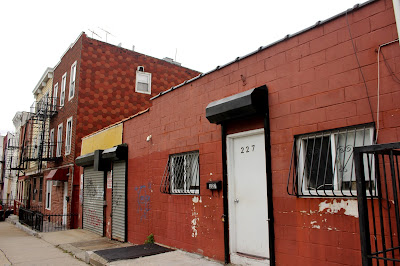 This one's been described on one listing site as a six family brick with "new widows" (we hope not) & another site lists it as being built in 1910.  It's funny how a brick facade allows for broker poetic license, even when a glimpse at the side of the building gives the game away. 225 21st Street is right there on the 1880 Bromley city map of Brooklyn, a little yellow rectangle marking it as wooden. It's a Class A Old Law tenement building - originally set up as a store and three apartments. A 1989 C of O still lists it as a three-family.
These old tenements, common to the neighborhood, have served countless families for over a century. How many stories in each set of rooms? 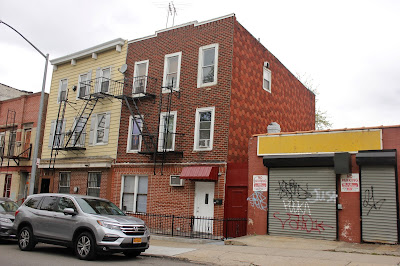 And while we're at 21st, let's revisit the 21st Street block party of 1982,  which proves that you don't need a fancy, tricked-out affair to make your party a success.  You need food, music, good neighbors & love.  It's full of sweetness, and if you've been around here for a while you might just feel nostalgic for times gone by.

More of the party here, here, and here

Posted by onemorefoldedsunset at Friday, May 06, 2016