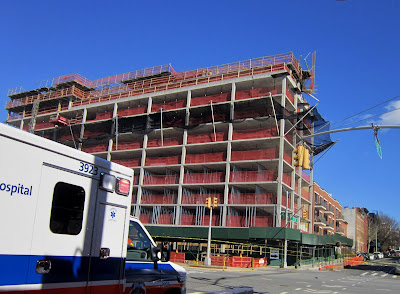 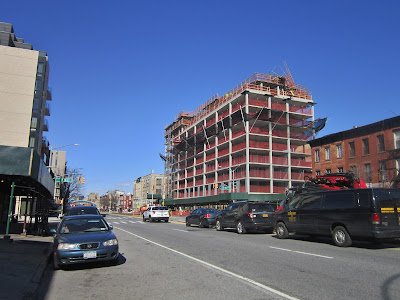 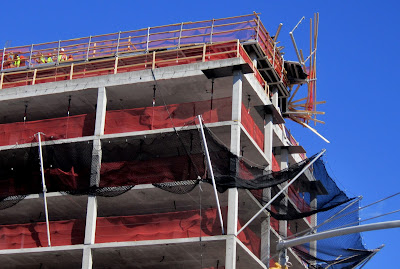 Police & FDNY cordoned off streets around the construction site at 535 Fourth Avenue (14th/15th) today, as strong winds caused the collapse of construction materials on the top floor. Fortunately, no injuries were reported. More pictures at Gothamist, here.  By late afternoon workers at the site were working to secure materials on the rooftop level. 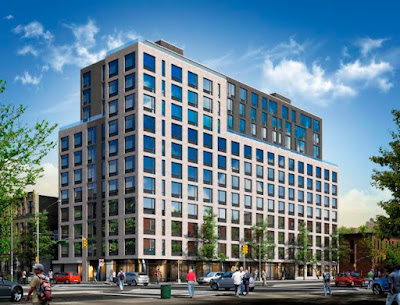 
535, formerly the address of Strauss Auto Supplies, was purchased by Slate Properties in 2014 for 22 million dollars.  Slate is active throughout the city, with two large apartment developments rising at 275 and 470 Fourth Avenue.  535 Fourth & 275 Fourth are both currently under a partial Stop Work Order - 535 for work not conforming to plans and construction safety issues, and 275 for work not conforming to plans.  Last fall LiUna Local 79 members were stationed at 470 Fourth supporting unionization for laborers working at the site. At the time Liuna alleged that laborers working at 470 were victim to low wages, unfair dismissals, harassment and unsafe working conditions. 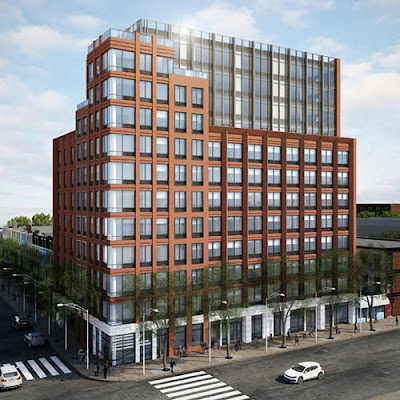 An apartment building at 310 12th Street, also owned by Slate, was found in violation last year for false statements concerning rent stabilized units at the property, and was subject to an executive search & investigation by the State Attorney General.  Slate re-sold the property last month, two years after buying it, for a four & a half million dollar profit.

Clearly today's weather conditions were extreme, but meteorological reports had given ample notice of today's wind strength, and construction companies/developers are responsible at all times for the safety of the sites they work at and the safety of nearby residents.  Given the City's announcement of more stringent inspections of construction sites, and increased fines for safety violations,  those developers that fail to follow adequate safety precautions should be heavily penalized.  Throw the book at them.

I stopped by Fourth Avenue this afternoon, and got chatting to a nearby business owner & longtime resident - here for forty-five years.  I often talk to older residents round here, and there's a common reaction of incredulity at the changing neighborhood.  They feel sold out by politicians, with soaring rents, buildings razed, friends and neighbors dispossessed, infrastructure strained to bursting & nothing to show for the new buildings but a scant handful of affordable units.  The "canyon of mediocrity" moniker is a tired trope at this point - this stuff is a complete betrayal of a community.

On a side note, police and fire depts. also cordoned off buildings at Fifth Avenue & 7th Street today, where it appeared that crumbling masonry had fallen.  A police officer on Fourth Avenue told me that construction debris had also fallen at a construction site on Pacific Street today, but I was unable to confirm a precise location.

Below - firemen relaxing at cordoned off 15th & Fifth: 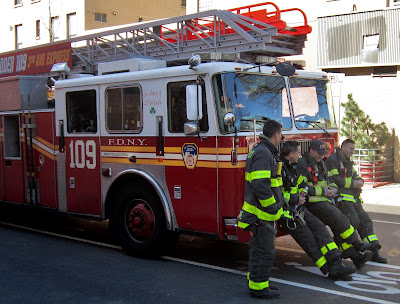 Posted by onemorefoldedsunset at Sunday, April 03, 2016