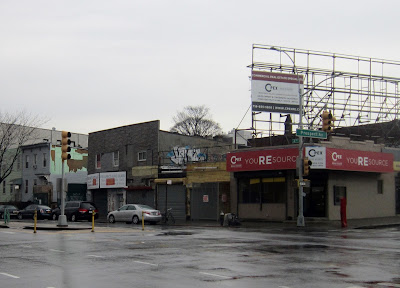 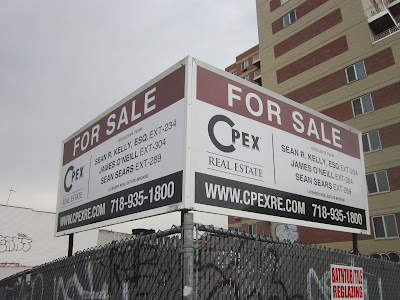 CPEX signs herald your trip up Fourth at Prospect Avenue, (or maybe you see them from above, stuck in an expressway merge).  To your right, luxury condos coming (sometime soon), & to your left, a vacant lot available for the same kind of a deal.

Starting next year the medians on Fourth between 8th & 18th Streets, & 33rd & 52nd, will be raised & widened, with greenery planted & benches installed at some locations. What would probably make more sense would be to put more benches on the sidewalks round here, both on Fourth & Fifth Avenues.  These would make the avenue a little more welcoming to pedestrians, especially to older residents, but also to families with children, retail patrons & others.   Sidewalk benches would do more to encourage a livelier street life than seating on medians, & would be simple & cheap to install.  Plantings on the medians - why not?  Seating, on the medians, in the middle of a congested & frankly vital service route - not such a great idea.

This particular stretch has already got some "Greenery, " but it's hard to imagine even the most ardent urban planner would suggest a median or even a sidewalk seat here.  It would please only those with a hardcore yearning for traffic &amp high-rise vistas.  More Ballard's concrete dystopia than Bellow's glorious, teeming with life Broadway. 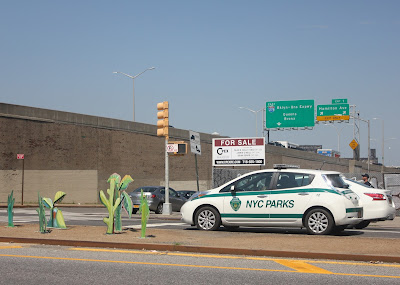 Posted by onemorefoldedsunset at Wednesday, April 06, 2016

I lived on 16th between 3rd & 4th for three or four years in the 'aughts. It was shabby. There was a flourishing drug trade being plied in the HFDC building next door, though the front-stoop lookouts were generally courteous. But it was often quiet, and got to feel like home before too long, and I was thrilled to be so close to Green-Wood, making at least one visit a week. Now I'm exiled in nearby NJ, and every time I go back to Brooklyn it gets harder to recognize. But I still miss it, and I still wish I could move back. It was home.