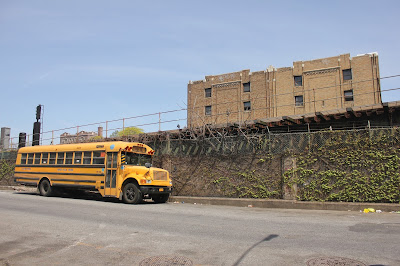 The warehouses at 639 McDonald stand right across from the train tracks, just where the underground F trains make their break for daylight.  I love these kinds of urban transitions. The earliest photograph I could find of 639 is dated 1929, and I'm guessing the building in the photograph is new. Today it's joined by an identical Deco twin, which must have appeared shortly after the picture was taken. By 1935 the buildings are mentioned in the press as the Thomas Brothers Fireproof Warehouses, and twenty years later public auctions of goods for which storage payments have lapsed are still being announced.  It's unclear what businesses occupied 639 in subsequent years, but the sign on the store today is for Empire State Supply Co., which sells hardware & construction supplies.  You'll have to cross the avenue to see the sign, and you're in for a treat. 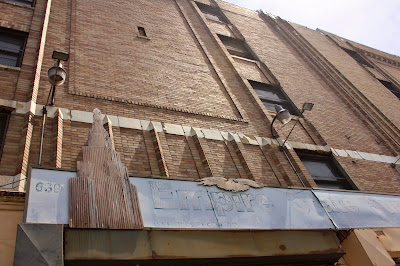 The Empire State Building (1931)!  Matching the company name, of course, but also attached to a structure of just the same architectural vintage.  That's style.

Posted by onemorefoldedsunset at Friday, April 22, 2016