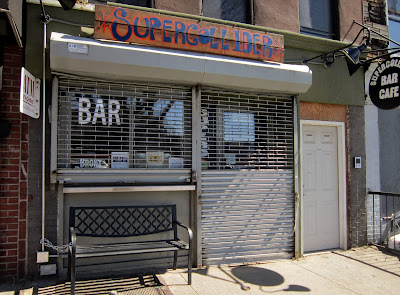 This was the scene last Sunday afternoon when I walked by Supercollider. I was surprised to see it closed, and hoped it was just temporary. The next day, I looked across the avenue & seeing the shutters up again, chided myself for assuming the worst the day before. But I was wrong. Reader Scott Steinhardt just dropped me a line to let me know the bar/cafe has closed for good.

Frankly, I'd been watching that stretch of Fourth for a while, as 615, 613 & then 611 were bought up by the California-based South Slope Bliss LLC. The name's a beaut, ain't it? I figured the end might be in sight for Supercollider's 609, & yes, the company snapped it up & the demolition's set to go. No plans have been filed for the building that will rise here, but we all know the score by now. High end rental/condo apartment building? Check. Boxy retail space for medical office/gym/wine store/test prep center? Check. Community space/balcony views/spacious accommodations? Check. A pet spa for Fifi? Why ever not?

Supercollider wasn't around for very long - it opened four years ago.  Some time before that there'd been another bar there called Alto's Pub, that was more of a hip-hop/salsa/reggaeton scene.  I wasn't a regular at Supercollider, but I dropped by every so often, and I liked the place a lot. The guys that worked there were wry and laconic, and they moved at their own, unflappable pace. They treated their customers well, but you also felt they were there to please themselves & I enjoyed that.  I was also fond of hanging out on the roof when the weather was fine.  No million dollar vistas from this little piece of rooftop, just fire escapes & laundry & treetops - a typical Brooklyn tar retreat. Now there's bliss for you. 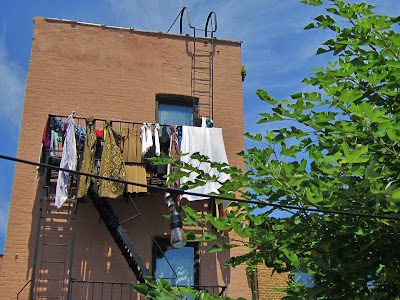 Posted by onemorefoldedsunset at Sunday, April 17, 2016